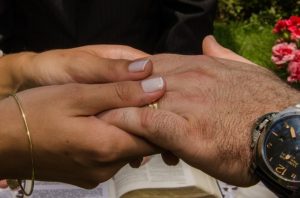 “There are three aspects to the statement of Genesis 2:24:

The Hebrew word translated “cleave” refers to (1) the pursuing hard after someone else and (2) being glued or stuck to something/someone. So a man is to pursue hard after his wife after the marriage has occurred (the courtship should not end with the wedding vows) and is to be “stuck to her like glue.” This cleaving indicates such closeness that there should be no closer relationship than that between the two spouses, not with any former friend or with any parent.

3. And they shall become one flesh

Marriage takes two individuals and creates a new single entity. There is to be such sharing and oneness in every aspect (physical, emotional, intellectual, financial, social) that the resulting unity can be best described as “one flesh.” Again, when there is greater sharing and emotional support gained from a continuing parent-child relationship than from the husband-wife relationship, the oneness within the marriage is being threatened, resulting in an unbiblical imbalance. (Posted on the web site, Gotquestions.org in the article “How Do You Balance Leave and Cleave with Honoring Your Parents“)

But then, the Bible also tells us to honor our father and mother. So how do we do both and make it work? After-all, many of us have had a strong tie to our parents all of our lives. How do we “leave” them emotionally, putting our spouse first? Is it possible to do this without hurting our parent’s so they don’t feel dishonored or abandoned?

“Leaving your home does not mean you permanently withdraw and no longer have a good relationship with your parents. That’s isolating yourself from your parents, not leaving. The commandment in Exodus 20:12 to honor your parents means that when you leave them, you need to go with respect, love, admiration, and affirmation for their sacrifices and efforts in raising you.

“But you must make a break from them and sever your dependence on them. As time passes, you must be diligent to prevent any reestablishment of dependence at critical points in your marriage.” (Dennis and Barbara Rainey)

That isn’t always easy because some parents still feel like their adult “children” should still put them first. Sometimes parents even try to re-establish their authority and/or connection in a way that undermines the new marriage. And that can bring major problems to this newer family unit.

And some “children” don’t want to cause problems if there is tension between their parents and their new spouse. So they either “look the other way” and figure their spouse will just have to work things out on their own. Or perhaps they forget where their allegiance is now supposed to be now that they’re married.

So, how does this new couple “leave and cleave” in a respectful way?

To help with this issue, we are providing below a link to the web site of the ministry of Family Life Today. It has an article posted that might give you guidance that could help.

31 responses to “Respectfully Leaving Your Father and Mother”