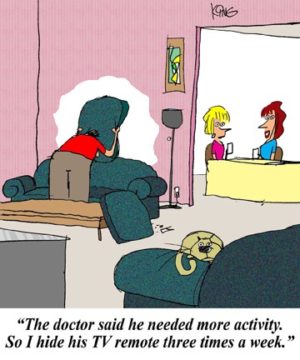 Are you interested in living healthier but your spouse has little to no interest in changing the “unhealthiness” of his or her own approach to everyday living? And do you feel like your differing approaches causes problems —sometimes minor, sometimes major?

Join the club. There are lots os spouses who find ourselves in this dilemma. It’s usually not a “whoa, this is the end of the world” type of situation, but still, it is bothersome.

It can also, on occasion, make you feel like you’re less of a marital team.

Steve and I have “battled” through this dilemma for most of our marital lives. We’ve been married for over 44 years. I’m more into nutrition, natural living, and exercise. However, Steve has more of a “laid back” approach to these types of matters. But because Steve is a Type 1 insulin dependent Diabetic (for over 41 years), I have major concerns about his health. This is particularly true when he doesn’t stretch himself a bit, as far as living a healthier lifestyle. It’s not just a lifestyle preference, but actually can be a life or death situation. At the very least it’s a life-altering situation if there are problems because Steve isn’t taking better care of himself.

We know we can’t prevent some things from happening concerning his health. But what we can prevent, it makes sense, at least to me, that we should do it. But Steve oftentimes maintains that he’s “just fine” and that I’m just too over the top on this. I disagree.

What Can We Do?

So… what to do? What have we done? We’ve learned to compromise …usually more than either of us wants. But we’re working on it, and honestly, it IS working for us.

Now and again, I get too “naggy” and have to respectfully back off (per his loving “suggestions”) to make our compromises work. I’ve/we’ve learned over the years that it’s just not worth the tension to keep going on and on about this matter. There are times when I just have to let go of trying to “improve” all or most of Steve’s eating and exercising habits. And other times, I feel I need to say and do something, so they go in a healthier direction. I’ve learned that it’s wiser to pick my battles for the “biggies.” These are points in time when he is over the top in not taking care of himself.

I have to say though, that Steve is definitely better about this than he was before. And he does try when he has a mind to. I need to give him credit for that. And I do. I really appreciate the fact that Steve will often stretch himself outside of his comfort zone. Many spouses won’t.

But periodically, Steve gets too “relaxed” in his eating and exercising habits. He will even confess this is true (especially when I “respectfully” remind him). It’s then that Steve stretches himself to eat more of the healthier things than he wants, and do at least some type of exercise most weeks. Getting a new dog recently has helped with this because he now is committed to walking her. That was his promise to me and commitment to her, before we agreed to adopt her from Korea. He’s doing great on this.

There are days when there is more tension over this matter than either of us wants. But we’re stumbling through and we do well most of the time. I hope you find that true for you, in your marriage. It’s important to not be disrespectful and to talk and especially to listen to each other whenever these types of issues surface in importance. We can’t erase each other’s voice and opinion on conflicting matters. Most often it’s not a matter of who is right and who is wrong, but what will work for both of us —not just one of us.

I came across a GREAT blog on this same issue, written by Andrea Fabry. She and her husband Chris, have quite the story of the health issues they have had to battle through because of black mold attacking their home. This attack to their home then attacked them and their 9 children. She has put together a terrific web site titled, It Takes Time. Posted on this web site Andrea, along with her husband Chris, have written about her being more health conscious than he has been. It also highlights what they both have learned, and do about it.

I HIGHLY recommend that you read the article linked to below. And then take a look around the rest of their web site. I believe you will benefit greatly.

• INTERESTED IN HEALTHIER LIVING —BUT YOUR SPOUSE IS NOT?

Filed under: Mental and Physical Health