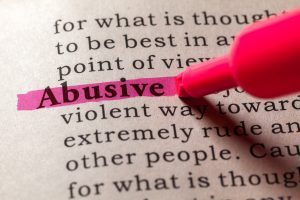 An abuser can be anyone, as evidenced from the Bible. The first instance of abuse in the Bible was when Cain killed his brother Abel out of jealousy.

Abusers are in every culture, ethnic group, and nationality in the world. There are both male, and female abusers, but most reported perpetrators of abuse are male.

“‘Now Cain said… let’s go out to the field.’ And while they were in the field, Cain attacked his brother Abel and killed him.” (Genesis 4:8)

I’ve found five predominant traits of an abuser. I’m sure there are many more but these five come readily to mind regarding most abusers.

Traits of an Abuser

They are charismatic and charming. There’s a certain attractive quality about them. They are extremely polite, and even delightful to be around. One would say, “he’s a charmer” or “Mr./Ms. Personality.”

Most often they are physically attractive, although there are some who are not so attractive. But for the most part they are attractive looking, or have some quality about them that’s appealing.

Most people can’t believe that the person is an abuser. They can’t see beyond his/her fascinating personality.

In fact in some instances, children, even though they may actually see the abuse, believe that somehow you the victim was the cause of the abuse. Why else would such a sweet person do what he/she does? They miss the whole point of abuse. It’s about power and control.

An abuser can be extremely hateful and jealous of his/her love relationships. Usually they have an unhealthy, unfounded suspicion of their spouse/or friend.

Most abusers, whether male of female, can be controlling in their behavior. They must have the upper hand, dominance, and rule in their affairs with their loved ones.

God is the only One who has power over His creations. “He rules forever by His power; His eyes watch the nations. Let not the rebellious rise up against him.” (Psalm 66:7)

Most abusers can be very deceptive, dishonest, and full of guile. They somehow manage to juggle situations, people and circumstances to their benefit. They are convincing impostors.

“…Bloodthirsty and deceitful men will not live out half their days.” (Psalm 55:23)

Most abusers are proud, arrogant, and egotistical. They have an unrepentant spirit about abuse, and most things. They believe what they have done was to keep things in control for your good. The abuser may cry, and plead even ask for your forgiveness. But it is not sincere. For soon the slander and abuse starts all over again.

“Whoever slanders his neighbor in secret, him will I put to silence. Whoever has a haughty eyes and a proud heart, him will I not endure.” (Psalm 101:5)

Here of several characteristics of an abuser:

If you have found some of these traits or characteristics in your relationship it’s time to get help as soon as possible.

This article comes from the Renewalcenter.wordpress.com, which has graciously allowed us to feature it on this web site. Their focus “is to provide a service of love and compassion to battered women/men by renewing the mind through biblical principles, and recover what has been lost to the person by the malicious acts of abuse.” They “have a holistic approach to concerns of: domestic violence, rape, date rape, coping with teen pregnancy, and CPS (NC only).” They also are a “Renewal Center for Battered Women: Life Coaching and Support Services, dedicated to serve clients in guidance and assistance in making better life choices through Biblical principles.” They “educate, instruct, edify, and coach.”

21 responses to “Abuser Traits and Characteristics”