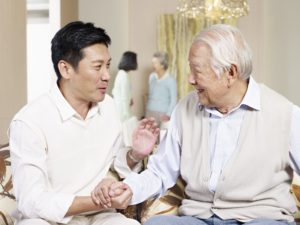 In Genesis 2:24 we read, “For this reason a man will leave his father and mother and be united to his wife, and they will become one flesh.” This principle is repeated in Ephesians 5:31. God’s pattern for marriage involves the “leaving” of parents and the “cleaving” to one’s mate. Marriage involves changing allegiance from parents to spouse. Before marriage, one’s allegiance is to one’s parents, but after marriage allegiance shifts to one’s mate.

Importance of Psychological Break from Parents

It is what the psychologists call “cutting the psychological apron strings.” No longer does the individual lean on his parents, but rather on his mate. If there is a conflict of interest between a man’s wife and his mother, the husband is to stand with his wife. This does not mean that the mother is to be treated unkindly. That is the second principle, which we will deal with shortly. The principle of separating from parents is, however, extremely important. No couple will reach their full potential in marriage without this psychological break from parents.

What does this principle mean in the practical realm? I believe that it suggests separate living arrangements for the newly married couple. While living with parents, the couple cannot develop independence as readily as when living alone. The dependency on parents is enhanced as long as they live with parents.

Living in a meager apartment with the freedom to develop their own lifestyle under God is better than luxurious living in the shadow of parents. Parents should encourage such independence, and the ability to provide such living accommodations should be a factor in setting the wedding date.

The principle of “leaving” parents is also important in decision making. Your parents may have suggestions about many aspects of your married life. Each suggestion should be taken seriously, but, in the final analysis, you must make your own decision. You should no longer make decisions on the basis of what would make parents happy but on the basis of what would make your partner happy. Under God, you are a new unit, brought together by His Spirit to live for each other (Philippians 2:3-4).

This means that the time may come when a husband must sit down with his mother and say,

“Mom, you know that I love you very much, but you also know that I am now married. I cannot break up my marriage in order to do what you desire. I love you, and I want to help you, but I must do what I believe is right for my wife and me. It is my hope you will understand because I want to continue the warm relationship that we have had through the years. But if you do not understand, then that is a problem you must work through. I must give myself to the building of my marriage.”

Importance of Changing Allegiance From Parents to Spouse

…The principle of separation from parents also has implications when conflict arises in marriage. A young wife who has always leaned heavily on her mother will have a tendency to “run to mother” when problems arise in the marriage. The next day her husband recognizes that he was wrong, asks forgiveness, and harmony is restored. The daughter fails to tell her mother this. The next time a conflict arises she again confides in Mom. This becomes a pattern, and before long, her mother has a bitter attitude toward the son-in-law and is encouraging the daughter to separate from him. The daughter has been very unfair to her husband and has failed to follow the principle of “leaving” parents.

If you have conflicts in your marriage (and most of us do), seek to solve them by direct confrontation with your mate. Conflict should be a stepping-stone to growth. If you find that you need outside help, then go to your pastor or a Christian marriage counselor. They are trained and equipped by God to give practical help. They can be objective and give biblical guidelines. Parents find it almost impossible to be objective.

Honor Parents, but Not Above Spouse

The second principle relating to our relationship with parents is found in Exodus 20:12 and is one of the Ten Commandments: “Honor your father and your mother, so that you may live long in the land the Lord your God is giving you.” It is repeated in Deuteronomy 5:16 and Ephesians 6:2.

The command to honor our parents has never been rescinded. As long as they live, it is right to honor them. In Ephesians 6:1, Paul says, “Children, obey your parents in the Lord, for this is right.” Obedience to parents is the guideline from birth to marriage. Paul’s second statement is, “Honor your father and mother—which is the first commandment with a promise—that it may go well with you and that you may enjoy long life on the earth” (vs. 2-3). Honor to parents is the guideline from birth to death. Honor was the original command and stands forever.

The word honor means “to show respect.” It involves treating one with kindness and dignity. It is true that not all parents live respectable lives. Their actions may not be worthy of honor, but because they are made in the image of God, they are worthy of honor. You can respect them for their humanity and for their position as your parents, even when you cannot respect their actions. It is always right to honor your parents and those of your marriage partner. “Leaving” parents for the purpose of marriage does not erase the responsibility to honor them.

How is this Honor Expressed in Daily Life?

You honor them in such practical actions as visiting, telephoning, and writing, whereby you communicate to them that you still love them and want to share life with them. “Leaving” must never be interpreted as “deserting.” Regular contact is essential to honoring parents. Failure to communicate with parents is saying, in effect, “I no longer care.”

A further word is necessary regarding communication with parents. Equal treatment of both sets of parents must be maintained. Remember, “For God does not show favoritism” (Romans 2:11). We must follow His example. In practice, this means that our letters, telephone calls, and visits must indicate our commitment to the principle of equality. If one set of parents is phoned once a month, then the other set should be phoned once a month. If one receives a letter once a week, then the other should receive the same. The couple should also seek to be equitable in visits, dinners, and vacations.

Holidays Can Get Complicated

Perhaps the stickiest situations arise around holidays —Thanksgiving and Christmas. The wife’s mother wants them home for Christmas Eve. The husband’s mother wants them home for Christmas dinner. That may be possible if they live in the same town, but when they are five hundred miles apart, it becomes impossible. The solution must be based on the principle of equality. This may mean Christmas with one set of parents one year and with the other the following year.

To “honor” implies also that we speak kindly with parents and in-laws. Paul admonishes: “Do not rebuke an older man harshly, but exhort him as if he were father” (1 Timothy 5:1). We are to be understanding and sympathetic. Certainly we are to speak the truth, but it must always be in love (Ephesians 4:15).

The command of Ephesians 4:31-32 must be taken seriously in our relationship with parents: “Get rid of all bitterness, rage and anger, brawling and slander, along with every form of malice. Be kind and compassionate to one another, forgiving each other, just as in Christ God forgave you.”

A further implication of honor to parents is described in 1 Timothy 5:4: “But if a widow has children and grandchildren, these should learn first of all to put their religion into practice by caring for their own family and so repaying their parents and grandparents, for this is pleasing to God.”

If I could make some other practical suggestions, I would advise you to accept your in-laws as they are. Do not feel that it is your task to change them. If they are not Christians, certainly you will want to pray for them and look for opportunities to present Christ, but do not try to fit them into your mold. You are expecting them to give you independence to develop your own marriage. Give them the same.

Do not criticize your in-laws to your mate. The responsibility of your mate is to honor his parents. When you criticize them, you make it more difficult for him to follow this pattern. When your mate criticizes the weaknesses of his parents, you should point out their strengths. Accentuate their positive qualities and encourage honor.

The Bible gives some beautiful examples of wholesome relationships between individuals and their in-laws. Moses had such a wholesome relationship with Jethro, his father-in-law, that, when he informed him of God’s call to leave Midian and lead the Israelites out of Egypt, Jethro said, “Go, and I wish you well” (Exodus 4:18). Later on, after the success of Moses’ venture, his father-in-law came to see him.

“So Moses went out to meet his father-in-law and bowed down and kissed him. They greeted each other and then went into the tent” (Exodus 18:7). It was on this visit that Jethro gave Moses the advice that we discussed earlier. His openness to his father-in-law’s suggestion shows something of the nature of their relationship.

Ruth and Naomi serve as an example of the devotion of a daughter-in-law to her mother-in-law after the death of both husbands. Jesus directed one of His miracles to the mother-in-law of Peter, and she in turn ministered to Jesus (Matthew 8:14-15).

Freedom and harmony are the biblical ideals for in-law relationships. The train of God’s will for marriage must run on the parallel tracks of separation from parents and devotion to parents.

This article comes from the book, Toward a Growing Marriage, written by Dr Gary Chapman, which was published by Moody Press (unfortunately, it is no longer being published).

136 responses to “Changing Allegiance From Parents To Spouse”