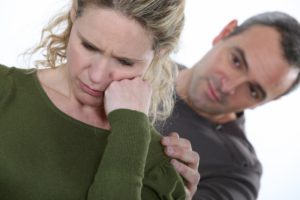 As it pertains to our marital partnership, it’s important to realize that:

“It is difficult to live in close proximity and not rub each others raw spots. Any sensitivity that one has will at some point be found in the course of the marital relationship. In some marriages due to past hurts in the relationship, partners intentionally hit each others raw spots intentionally and in anger. Just as often, the sore places in our hearts get rubbed accidentally by a partner who did not know the wound was there. Emotion is faster than thought; when one gets triggered, one can react without thinking. When a raw spot gets triggered, things can very quickly go from love and closeness to tooth and nail.” (Scott Wood, from his web site article, “Finding the Raw Spots“)

As a matter of fact, some people call them emotional triggers. Others call them raw spots. But whatever they are, a lot of the time we’re capable of overreacting, when they’re pressed, causing trauma within the marital relationship. That’s most likely because when we marry we’re told in the Bible that “two become one.” We are to “leave” our family of origin (as far as them being our top priority) and “cleave” to one another. As a result, when something happens to one of us, it affects both of us (at least that’s the way God ordains for it to be).

So what are emotional raw spots?

Most of us pretty much know, but below is one of several definitions I found. Someone named “Intrepid” explains it this way:

“A raw spot originally forms from moments in a person’s past when attachment needs were repeatedly neglected, ignored or dismissed resulting in the person. The child, teenager or adult in a past romantic relationship is feeling:

As a result, you often act “before you think” because of the emotionality attached to past memories and the feelings that seem to accompany them.

“Sometimes these raw spots are wounds from childhood. Attachment needs that were ignored or dismissed. A husband who grew up believing that he could never be good enough withdraws in stony silence or responds in anger when his wife offers suggestions. A wife whose previous husband was unfaithful becomes angry and feels threatened over her husband’s business conversations with other women. Sometimes these wounds developed during the present relationship. A wife whose husband was not available at a critical moment of need becomes hypersensitive to any behavior that indicates that he does not really care or is not really there for her. (Scott Wood)

This is all tough stuff to grow beyond.

I was trying to think of some raw spots that Steve and I each have that pertains to this issue. With Steve (I have his permission to tell you this), it is the matter of feeling stupid. He has felt that he’s not as smart as other’s think he is. And if they found out, they would be disappointed in him and/or treat him disrespectfully.

Nothing could be further from the truth. I know. I’m married to him. But it’s these old mental tapes that keep re-emerging, replaying events from his childhood. He recalls when he was teased and felt very alone in trying to make sense of it all. I have to say that Steve has worked very hard in more recent years to ignore those raw spots. He is now realizing that there isn’t any truth to them.

But every once in a while, during vulnerable times, he will still grab onto those old feelings. That’s when it’s all the more important for me to be aware, and careful in how I treat him when I see that this issue has arisen again. I NEVER want him to buy that lie (which it is). And as his help mate, I want to help him to get past those feelings, and move on to being confident, rather than feeling insufficient.

Don’t Give Energy to Raw Spots

As for my raw spots, I’ve sure had many of them. Thankfully, I have a husband that has helped me to move on in many ways, to not give them the energy I once did. But one that keep rearing its ugly head is the raw spot where I feel like I’m a bother to people. I have felt that whenever I have to ask someone to help me in some way, I’m bothering them. And this makes me feel horrible. I wrestle enormously when I have to ask for help that I’m not paying for —either financially or by returning a favor. All my siblings actually have that same raw spot. It’s a tough one to overcome. It brings out different emotions, when pressed, and different reactions.

The writer, Intrepid, later points out something I’ve seen to be true:

“Action is wired into every one of our emotions [particularly when it comes to emotional raw spots]:

•  “Anger tells you to approach and fight.

•  “Shame tells you to withdraw and hide.

•  “Fear tells you to freeze, run away or, in real extremes, turn and attack.”

(These quotes are written by INTREPID in the web site article, “Emotionally Focused Therapy Helps Find the Raw Spots when you Unintentionally Hurt your Lover” …even though this article isn’t written from a Christian perspective, it’s a good one to read.)

I confess that I’ve often found myself putting action to my emotional raw spots. How I wish I could say that didn’t. But I have to say that I feel much more relaxed about this issue around Steve because he has been so good in not making me feel like I bother him, and by being so good about helping me if I need it, knowing that I work hard not to do so. But if I didn’t have him being as supportive, as he is, I would definitely be struggling BIG time.

As I stated previously, we all have those emotional raw spots (or triggers). They could be financial matters that trigger raw emotions. If so, here’s an article I found that might help: Financial Infidelity in Marriage. (We also have articles posted in the Marriage and Finances topic that might help you.)

Here are a few other articles, on other types of Raw Spot issues, you may find helpful:

•  Marriage 911 (for emotional hurt, perhaps dealing with an affair)

And then, here’s some added advice (for you and your spouse if he or she will agree to work on this matter as marriage partners, rather than foes). It’s given by Dr David Hawkins:

— “Agree together to respectfully face raw spots, finding the balance between honoring raw spots and talking about them carefully. We need not dance AROUND raw spots, but only dance CAREFULLY around them. We need not avoid these issues, but only agree together that these issues deserve, even demand, GENTLE ATTENTION. You will do your mate a great service by honoring these vulnerable issues with one another. (From the Crosswalk article, Dancing Lightly on Raw Spots) 

— “We can help each other heal. When we share our raw spot with our mate, opening it up to the light, we open ourselves up for healing. Of course, to do this requires each making an agreement to treat the other carefully and caringly. As we do this, showing understanding, grace and sympathy, we heal. (Dr David Hawkins, from the CBN.com article, Marriage 911)

— “Finally, appreciate your raw spots and those of your mate. Our vulnerabilities, shared appropriately, bring us closer to one another. As we sympathize and honor our mate for where and how they’ve been hurt, we create a powerful bond. As we look to the interests of our mate, sharing compassion, we unite our hearts.” (Bill Ellif, from the Growthtrac.com article, Taking Care of Raw Spots)

When you look at the scriptures, we’re told to be compassionate with each other. With that in mind, how can we ignore our spouse’s raw spots and not treat them as being important to them and to us? We’re told in God’s word: “Let each of you look not only to his own interests, but also to the interests of others.” (Philippians 2:4). We’re also told:

— “Be kind to one another, tenderhearted, forgiving one another, as God in Christ forgave you.” (Ephesians 4:32)

— “Therefore, as God’s chosen people, holy and dearly loved, clothe yourselves with compassion, kindness, humility, gentleness and patience. Bear with each other and forgive one another if any of you has a grievance against someone. Forgive as the Lord forgave you.” (Colossians 3:12-13)

— “Finally, all of you, be like-minded, be sympathetic, love one another, be compassionate and humble.” (1 Peter 3:8)

Be aware of the fact that we all have emotional triggers. Lets work together to be more compassionate, as it pertains to each other’s raw spots. Don’t ignore or run over them, thus, hurting our spouse all the more. After all, he or she expects more from you. That is only reasonable. You DID vow to love, honor, and protect your spouse for the rest of your lives.

And for those of us who have these raw spots, lets be proactive in working on them. Sometimes therapy is needed. But work on it so we can better treat our spouse with compassion —looking “not only to our own interests,” but to theirs, as Christ would have us.