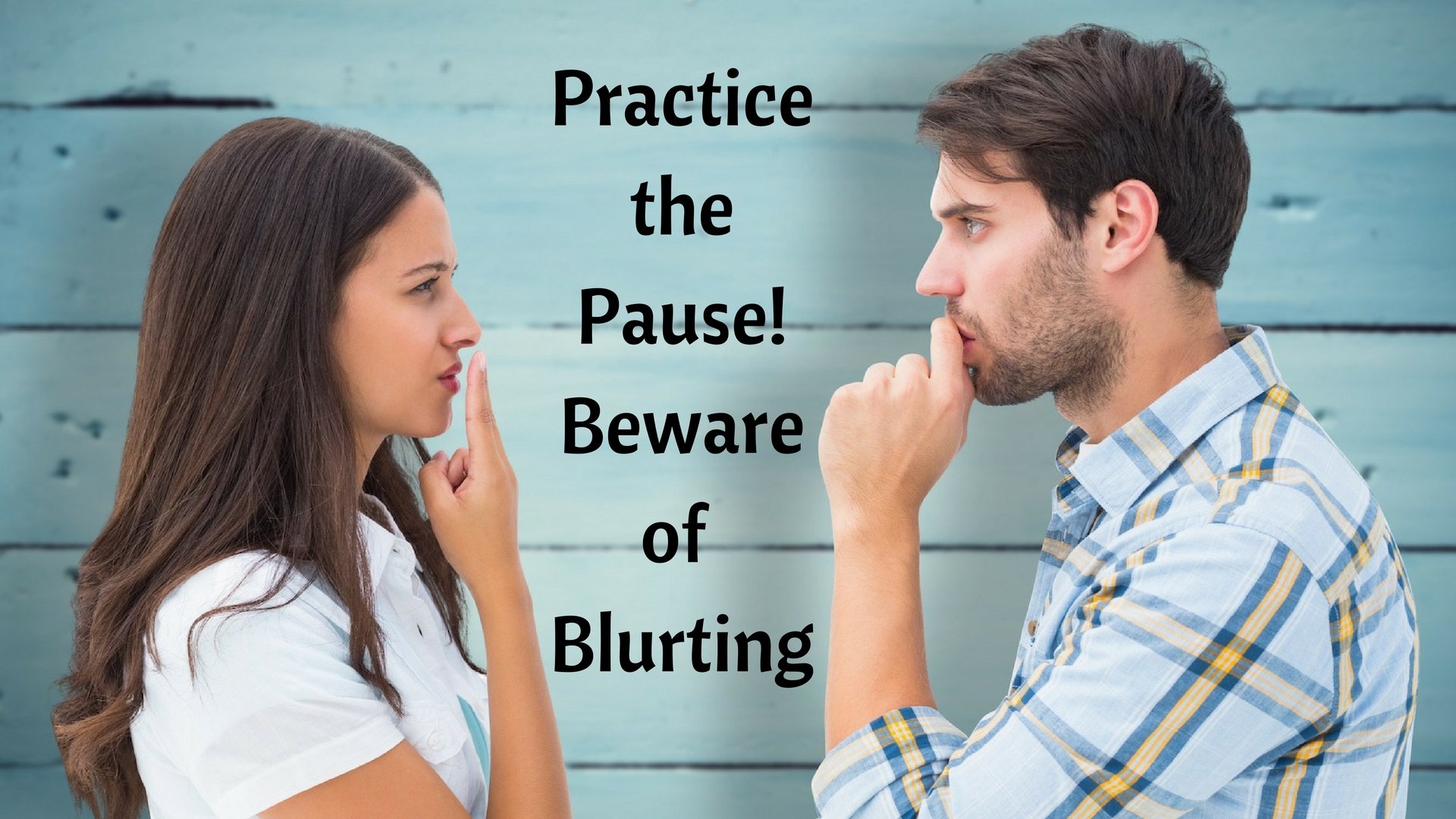 Practice the Pause. That is such good advice. I wish Steve and I would have heeded it the other day. Here we are as marriage educators, and yet sometimes we fall into bad behavior that we KNOW we shouldn’t.

The other day we didn’t practice the pause. We allowed ourselves to fall into blurting out whatever first came to mind. And what came to mind SHOULDN’T have been voiced. We each got heated, blurted, got angry at each other. And then yes, we did apologize afterward. But we can’t take back words that have been given a voice. We just shoved them out there in their raw form.

We’re told in scripture in Proverbs 17:14, “Starting a quarrel is like breaching a dam. So drop the matter before a dispute breaks out.” Well, we didn’t do that. We didn’t heed our own advice to “beware of blurting out that, which first comes to mind if it is not ‘wholesome talk.'” All of this was absolutely uncalled for… we know (and you know) better than that. Perhaps you’ve been there too.

There is a false notion going around that “a great relationship lets you vent all your feelings.” That is totally not true. A Marriage License does not give you the license or permission to blurt out whatever you want to say whenever you want to say it. Marriage partners need to be smarter than that. That is how you can destroy your relationship, not grow it.

“A fool gives full vent to his spirit, but a wise man [or woman] quietly holds it back.” (Proverbs 29:11) “Speak words motivated by love, rather than vindictiveness. Ask the Lord to put a ‘governor’ on your tongue today, to enable you to speak only words that reflect the heart of Christ. If you feel the need to ‘vent’ tell the Lord what’s on your mind, rather than blurting it out to your spouse.” (Nancy Leigh DeMoss)

“Getting things off your chest might feel good, but when you blurt something out in the heat of the moment, you risk damaging your relationship permanently. Many relationships are destroyed when one partner can’t forgive something that was said during uncensored venting.

“Before you say something you might regret, bite your tongue and give yourself a moment to consider how you really feel. The things we say while we’re letting loose often don’t represent how we really feel and shouldn’t be communicated—especially if they are potentially destructive.”

This goes along with the article, posted on this web site: Dumping Emotional Garbage.

Plus, this confirms all the more what God tells us in the Bible in Ecclesiastes 10:12-13:

“Words from a wise man’s mouth are gracious, but a fool is consumed by his own lips. At the beginning his words are folly. At the end they are wicked madness—and the fool multiplies words.“

Did you see that? It says, “At the BEGINNING his words are folly…” And “at the end they are wicked madness.” In other words, if you begin to blurt out folly, you will end with “wicked madness.”

God also tells us in the Bible:

“Do not be quick with your mouth, do not be hasty in your heart to utter anything before God. God is in heaven and you are on earth, so let your words be few.” (Ecclesiastes 5:2) “Do you see a man who speaks in haste? There is more hope for a fool than for him.” (Proverbs 29:20) “If anyone considers himself religious and yet does not keep a tight rein on his tongue, he deceives himself and his religion is worthless.” (James 1:26)

This is so very, very true. Toby Mac is attributed with saying these very wise words that go along with this issue. We’re not sure if he just repeated it to his audience, or if he is the originator of it. But either way, it’s great advice:

When in doubt, pause.

And when you pause, pray.

Bite your tongue rather than blurting out whatever first comes to your mind. And if you do, “If you have played the fool and exalted yourself, or if you have planned evil, clap your hand over your mouth! For as churning the milk produces butter, and as twisting the nose produces blood, so stirring up anger produces strife.” (Proverbs 30:32-33) Don’t exalt yourself thinking that your opinion needs to be shoved out there—whether it’s a foolish one or not. But if you do, be wise enough to go to your spouse and in HUMILITY, confess your sin (because that’s what it is if it is mean-spirited, lacking love and consideration). And then ask for forgiveness.

That’s what we did. Steve made the approach first. And I confessed my part, asking for forgiveness, as well. I wish we would have never fallen. But I’m thankful that we have worked on having a healthy relationship so we’re quick to give each other forgiveness and grace. If you haven’t done this, today can be a New Beginning to start building that type of marriage.

We hope you will… and pray for those of you who do.