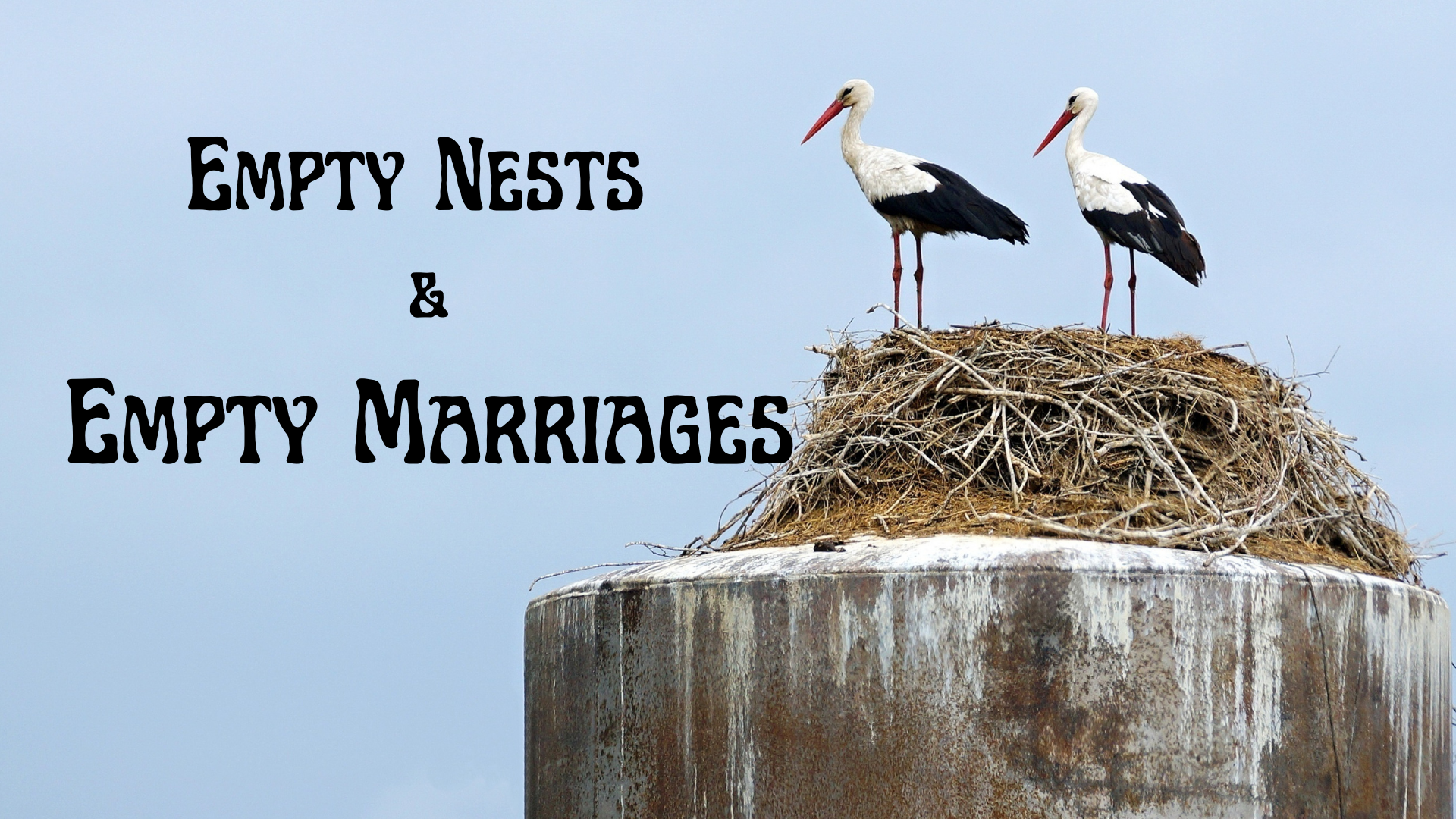 It’s September. The children are off to college and many parents are packing their bags, too. Although some may be going off on vacation, many couples will be headed for divorce court, say marriage specialists. The “empty nest” can be a perilous time for married couples, said Claudia Arp.

She, along with her husband David, have written two books on how to “retool” a marriage after the children leave home.

Stay Together for the Kids

Many couples stay together as long as their children are the focus of the family, Mrs. Arp said in an interview. The whirlwind of work, school and social activities can be all-consuming — especially during the teen years — and may act as a buffer for problems in the parents’ relationship. So when the children leave home, the natural next step is for couples to move their focus from their children to each other, Mrs. Arp said.

The marital meltdown can be swift, said Mrs. Arp. It often stems from a mountain of “little issues” that have accumulated. As a result, they created an emotional distance between spouses. For instance, she recalled, a well-to-do man recently called her in a panic. He said that after his children left, his wife told him she didn’t love him anymore. She wanted out of the marriage. “I’ll do anything; just tell me what to do,” the man had begged his wife.

There is a Way Back

Mrs. Arp said that based on her and her husband’s experiences running Marriage Alive seminars, “there really is a way back” to a happy marriage if both spouses want to work for it. But the reason the Arps are sounding an alarm about late-in-life divorces is because they believe it happens far more frequently than couples realize.

According to data from the National Center for Health Statistics, the overall divorce rate declined by 1.4 percent between 1981 and 1991. This is what the Arps said in their book, The Second Half of Marriage: Facing the Eight Challenges of the Empty-Nest Years. However, during those same years, the divorce rate grew 16% for couples married 30 years or more.

Diane Sollee, director of the Coalition for Marriage, Family and Couples Education, said “with baby boomers hitting that empty-nest wall in droves, we might see a spike in the divorce rates if we don’t do something.” “In our focus on preparing newlyweds we often forget how fast things can unravel at the other end of marriage.”

“It’s certainly possible that there could be a peak in the divorce rate via the numbers of baby boomers,” said Craig A. Everett, a marriage therapist in Arizona and editor of the Journal of Divorce and Remarriage. “However, there are other important factors in the equation,” he said. Both baby boomer spouses often have careers, which may reduce their “empty nest” feelings, he said.

“The new marital enhancement movement may encourage couples who have been unhappy during their parenting years to seek either therapy or educational experiences at the time of the empty nest rather than divorce.”

Members of the Adult Kids of Divorce (AKOD) club, who were all 18 or older when their parents divorced, said they didn’t need statistics to tell them that something terrible was happening in too many families.

AKOD club co-founder Susan Cherepon said the 1999 divorce of her parents after 25 years of marriage was “absolutely the worst thing that ever happened to me, bar none.” “It rips your whole world apart,” said Miss Cherepon, who lives near Boston. “Everything you thought you were sure of, suddenly you’re not sure of.”

“It was a terrible time. I went through all the pain and grief that any child does when this sort of thing happens, but I had the added bonus of having zero support because I was an adult,” said Susan Hackett of Toronto, whose parents divorced when she was in graduate school.

Many AKOD members said that divorce caught them by surprise. “My parents appeared to have an ideal marriage —married for 30+ years. They laughed a lot, and always made up after fights. The fact they were divorcing, splitting up, was a shock to me,” said Rachel Michelson of Sunnyvale, Calif. He learned of the breakup while she was planning her wedding.

“I often thought [divorce] would happen growing up. Yet after the 30-year mark, I felt sure we were through the bad part,” said Kelly Stewart of Wartburg, Tennessee. Her parents are in the process of divorcing. “My father thinks things are still salvageable,” she said. But her mother believes she can “do her art thing” only if she’s free of him.

Several AKOD members said postponing the divorce didn’t make it any easier. “Regardless of whether I’m 7 or 27, I’m still my parents’ child. It’s also still my family that’s breaking up,” said Karen Eddins of Brooklyn, N.Y.

“I don’t believe there’s ‘better timing’ when you are talking about your parents’ divorce,” said Mandy Hagood of Austin, Texas. She was 25 years old when her parents parted. “I’ve often wondered if it would have been easier had I been a child,” she said. She has been confused since hearing the details about the breakup. Even as an adult it was traumatizing and led her to question her own marriage.

Some marriage specialists say few resources are available for families who are wrestling with late-in-life marriage problems. The Arps said they wrote a second book with Scott Stanley, Howard Markman and Susan Blumberg because of a lack of practical advice on the issue.

Jana Staton, a marriage therapist in Missoula, Mont., uses the 1999 movie “The Story of Us” to help married couples avoid empty-nest divorces. The movie is about a 15-year married couple played by Bruce Willis and Michelle Pfeiffer. They separate and consider divorce while their children are away at summer camp. “This is the only movie I’ve seen that really looked at the anatomy of a marriage” with respect for the union and its difficulties, said Mrs. Staton.

“A lot of couples think they can wait until the kids are out of the house before dealing with their marriage,” she said. “The message I want to give is not to wait.”

This article titled, EMPTY NESTS AND EMPTY MARRIAGES was written by Cheryl Wetzstein. It was featured in The Washington Times – September 4, 2001.

To learn more on this issue we encourage you to read the following linked articles:

• CHALLENGES FOR THE SECOND HALF OF MARRIAGE