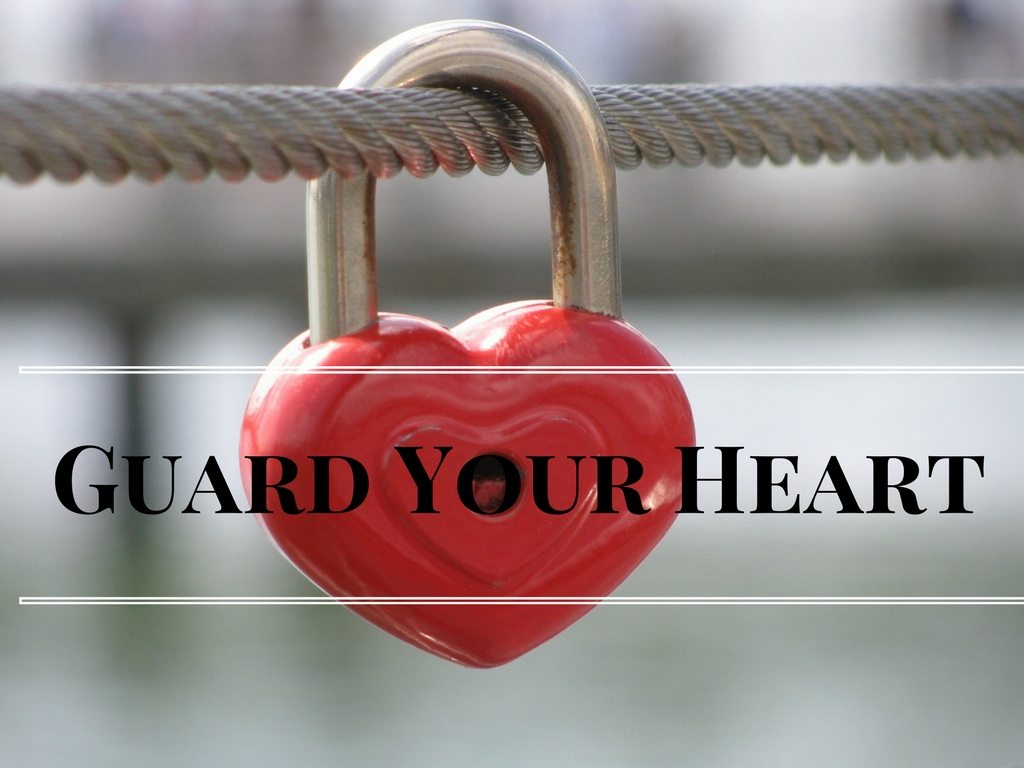 The above title might seem obvious. Why wouldn’t you guard your heart from getting involved with a jerk or jerkette? Who in their right mind would go out to get involved with someone like that? There are those who appear to be obvious jerks or jerkettes (or “losers” —meaning, you lose if you get involved with one) in your eyes. And in those cases, it’s not too difficult to steer clear of going out on a date or beyond with them.

But then there are the charmers —those that look good on the outside and yet you don’t really know they can cause trouble until later when things are more complicated and your emotions are involved.

Sadly, some of them can steal your heart away and cloud your common sense before you realize that you’re now entangled in such a mess.

So to help you guard your heart ahead of time, we’re going to share some information and lead you to read a few additional web site articles on this area of being “single yet preparing.” We hope it will help.

The first bit of information you might consider was sent to us from a friend of the ministry. The author is unknown, but what they write sure seems wise!

THINGS I WISH I’D KNOWN BEFORE I DATED

What great pointers! We hope they’re not too vague and that you won’t rationalize yourself out of heeding this advice, figuring it’s not important, because it is. These are character issues, that if you pay attention to them, they could save you from future problems.

The following is another relationship guideline given to us by a friend where once again, the author is unknown. But this is for those of you who are already dating someone and you’re considering marriage:

HERE’S HOW TO AVOID SAYING “I DO” TO A LOSER

1.  The Relationship Track Record: If you are involved with someone with past anger or jealousy problems, it’s likely these issues will re-emerge. Don’t get fooled into overlooking his problems with others because you believe “he didn’t love them the way he loves me.”

2.  Look at how he/she treats others: If you are on a date and your boyfriend goes on and on about an argument and how he had to “rip him a new one,” remember it’s just a matter of time before he “rips you a new one.”

3.  Get to know the family: One dinner with everyone on their best behavior is not going to provide enough insight into family dynamics. You’ve got to spend time with people to spot trouble. Ask your partner how his or her family showed love, and especially how it managed anger and conflicts.

4.  Is he or she a good person? Character matters. Pay attention to their daily behavior. Does he/she support you or manipulate you to get his/her way? And remember…

5. People can change, but it’s difficult. Change requires concrete steps such as reading books or getting therapy as well as willful effort. No one can force anyone else to change.

Another good piece of advice comes from author, Gloria Shaffer. She writes:

“It doesn’t matter whether you’ve just begun to date or your dating life is an ugly wreck, there’s hope for you. You don’t have to be an accident waiting to happen. By putting yourself in the driver’s seat you can avoid crashing into losers. To maneuver safely through the hazards of dating, it’s important to acquire the following qualities, much like a driver becomes adept at scanning the road and using peripheral vision to know what’s nearby.

She then goes on to give pointers that you might find helpful in this Growthtrac.com article that I encourage you to read:

• HOW NOT TO DATE A LOSER

Do you see how important it is to avoid dating mistakes that are obvious? At least they’re obvious to those us who are on the outside looking in. They’re less obvious to those directly involved. They’re not something a person necessarily “catches” on their own. When you combine biochemical interactions where brain and body chemistry is in play, things get trickier.

Below are a couple of articles on the “chemistry of love” that can help you to see how and why this is so. But then after reading these articles we want to lead you to some other information that can help you beyond what you’re going to learn in the following linked articles. However, first things first. Please click onto the web link below to read:

And for a technical view where “Scientists say that the brain chemistry of infatuation is akin to mental illness —which gives a new meaning to being ‘madly in love'”, below is a link to a National Geographic article. You won’t find the article coming from a Christian perspective, of course, but it will help you to see how brain chemistry can cloud human judgement. That’s why it’s so important to pay attention to more information that can and should be gathered, when “love” becomes involved, beyond just feelings.

With that foundation laid, the following are a few questions along with a challenge to pay attention to.

“Are you too trusting, always seeing the good and jumping to positive conclusions too quickly? Do you get into a relationship and immediately become swept away by the furious waves of attention and love? Do you find yourself enamored with this prince or princess, spending every free moment with that person, constantly conversing by phone or computer, or just talking to him or her in your head?

“If so, then you need to step back and look at your track record. If you have a history of these dreamy love attacks that end up spiraling into nightmares, then you may be avoiding some of your past pain by projecting your ideals onto a prince or princess who is nothing more than an ordinary frog.” (Dr John Van Epp, from the book, “How to Avoid Marrying a Jerk”)

Dr Van Epp goes into detail in his book, about basic principles to help you to recognize whether you are dating someone who could be problematic to marry. He says there are certain “bonding dynamics” that it would be good to go through and evaluate so you better know if you really should proceed to marry each other.

Even if you go through the dynamics of bonding as you should, you can still have a tendency to go through a “Love is Blind” syndrome that can cause problems. That’s why it’s important to learn more information so you have less of a tendency to marry a jerk or jerkette. Dr Van Epp discusses this blind love syndrome in his books. Also he does this wherever he has the opportunity to expose it to the light. He talked about this in a Keynote address in a Smartmarriages Conference.

In it he told everyone:

“The ‘Love is Blind’ syndrome simply says that we either have an underdeveloped understanding of what to get to know about somebody. Or it could be that we have an overdeveloped attachment that is blinding us to areas. These are critical areas that we really should pay attention to. They are predictive —like a preview. They are like the dark clouds on the horizon before a storm. Also, they reflect the need to have a harmony between the head and the heart.

“So basically I am going to present you with an overview of the PICK program that is about the head and the heart.”

Wait More than a Year

Dr Van Epp explains what he has learned that can help you discern when you are dating a jerk or a jerkette, or a loser. He also gives additional advice which you might want to heed. And one of the things he recommends is that a couple waits well beyond a year of seriously dating before marrying. In a FirstThings.org article it’s explained this way:

“Dr. Van Epp encourages people to wait two years before marrying. You may be thinking that sounds like an eternity. Van Epp believes that within three to six months you can begin to know someone, but like looking through a microscope at its lowest power you can only see certain things in that amount of time. Dating someone for an extended period allows you to see certain things that may not become evident right away. When you have dated someone for a year you begin to have history with him/her. Many couples get through their first year just fine, but in the second year issues often begin to surface that weren’t there in the past.

“A relationship needs time for things to normalize. Many people are very flexible in the infancy of a relationship, but as time goes by they become less flexible. By taking things slow and easy you give your relationship time to grow up and you get to see how the person will really treat you.”

Who to Avoid Marrying

Dr Van Epp makes the point about waiting two years before you marry. This is because it helps you avoid marrying someone who is mentally ill and/or a narcissist. Many times full blown characteristics of these conditions don’t come out until a longer passage of time. As he says in his book,

“Narcissists do not appear self-centered at the beginning of a relationship.  …Only after some time do they reveal their extreme demands. It’s a kind of “buy now, pay later” arrangement. Once one disappointment blemishes the relationship, the narcissist can never retrieve that fantasy feeling of true love. The benevolent God becomes depraved and angry, exacting obedient love while never feeling satisfied or fulfilled. …Narcissism lacks resiliency. So when the first flaw appears, love begins to die.”

What an important point! We hear all the time from spouses who carry deep regrets. They wish they had waited longer before marrying because they believe they would have seen more warning signs. These could have stopped them from marrying the person they did.

“Tell everyone you know not to settle for anything less than the best. Not only will they be unhappy, but they’re missing out on God’s absolute best for them. And time’s wasting.”

To learn more, please click onto the Crosswalk.com web site link to read:

• SETTLING FOR LESS THAN THE BEST

Trust in the LORD with all your heart and lean not on your own understanding. In all your ways acknowledge Him and He will direct your paths. (Proverbs 3:5-6)

For I know the plans I have for you says the LORD. Plans to prosper you and not to harm you. Plans to give you a hope and a future. (Jeremiah 29:11)

Seek first the kingdom of GOD and His righteousness and all these things will be given to you as well. (Matthew 6:33)

I can do all things through CHRIST Who gives me strength. (Philippians 4:13)

And my GOD will meet all your needs according to His glorious riches in CHRIST JESUS. (Philippians 4:19)

Tagged: chemical attraction, guard your heart, is my love the real thing, love is blind