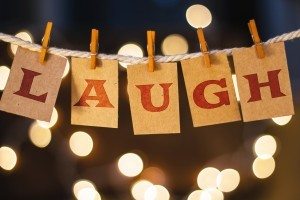 One of the things I love about my husband Steve is that he keeps me laughing. Although I have to say that sometimes I don’t find him very funny, when his timing isn’t so great. But most often, he has ways of bringing a smile to my face, even in the toughest of times. I truly love his sense of humor.

That makes me appreciate him all the more. We LOVE to laugh together. And we look intentionally for ways to do so as often as we can. It offsets some of the not so funny stuff.

Did You Lose Your Sense of Humor?

They say that usually after marrying, humor is the first to go. That’s because life has a way of spiraling into some real serious stuff.

And the fact is that sometimes, we take too much, too seriously. There are times when I even have to work at looking at the humor in everyday situations. But it’s there if I look hard enough. And it’s worth it when I find it and grab onto it.

So, to add a little humor to your day, (and I say little, because it can depend upon what side of the “humor” you’re landing on and how prickly you feel today), the following are a few marriage jokes that may turn your frown upside down into a smile.

Here’s the first one:

FOR EXAMPLE: One evening last week, my wife and I were getting into bed. The passion starts to heat up. She eventually says, ‘I don’t feel like it, I just want you to hold me.’

So she says the words that every man on the planet dreads to hear. ‘You’re just not in touch with my emotional needs as a woman enough for me to satisfy your physical needs as a man.’ She responded to my puzzled look by saying, ‘Can’t you just love me for who I am? Does it have to be for what I do for you in the bedroom?’

Realizing that nothing was going to happen that night, I went to sleep.

The next day I opted to take the day off of work to spend time with her. We went out to a nice lunch. We then went shopping at a big, unnamed department store. I walked around with her while she tried on several different very expensive outfits. She couldn’t decide which one to take so I told her we’d just buy them all.

She wanted new shoes to compliment her new clothes. Do I said let’s get a pair for each outfit. We went onto the jewelry department where she picked out a pair of diamond earrings. Let me tell you…she was so excited. She must have thought I was one wave short of a shipwreck. I started to think she was testing me because she asked for a tennis bracelet when she doesn’t even know how to play tennis. I think I threw her for a loop when I said, ‘That’s fine, honey.’

She was almost nearing sexual satisfaction from all of the excitement. Smiling with excited anticipation she finally said, ‘I think this is all dear, let’s go to the cashier.’

I could hardly contain myself when I blurted out, ‘No honey, I don’t feel like it.’

Her face just went completely blank as her jaw dropped with a baffled, “WHAT?’

I then said, ‘honey! I just want you to HOLD this stuff for a while. You’re just not in touch with my financial needs as a man enough for me to satisfy your shopping needs as a woman.’ And just when she had this look like she was going to kill me, I added, ‘Why can’t you just love me for who I am and not for the things I buy you?’

Apparently I’m not having sex tonight either.

Again, to some people THAT’S funny. It’s not so much to others.

“I heard about a woman who had brought her purchases to the checkout line in a department store. When the cashier asked if she’d be paying with cash, check or credit card, the woman began fumbling in her purse for her wallet. She agitatedly placed various non-wallet items on the counter while she looked for it.

“One of the things she’d pulled from her purse was a TV remote control. The cashier humorously asked if she always carried one of these with her.

“’No,’ the woman replied. ‘But my husband refused to come shopping with me today. I figured this was the worst thing I could do to him legally.’”

Gals may like that joke better than that husband would!

And if you could use a few more, view the Featured Video A Marriage Skit – Chonda Pierce and Ken Davis. And also, click into the following web site link for some added humor:

I hope at least something in all of this blesses your day!

One response to “Humor in Marriage”