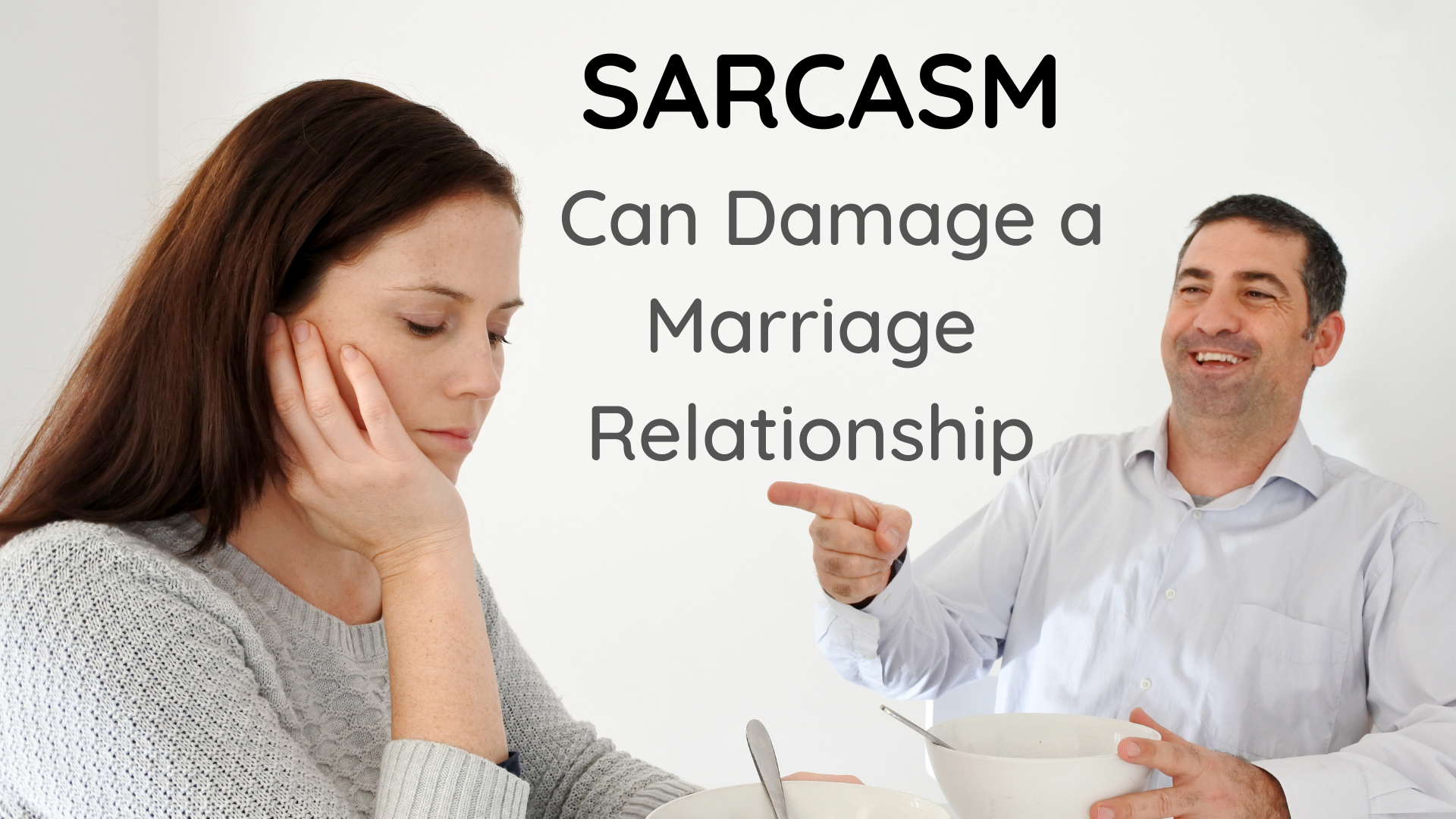 So, the title of this Marriage Insight is: “Sarcasm Can Damage a Marriage Relationship.” The question is: Does sarcasm always damage a marriage? No! If it isn’t mean spirited or if it isn’t directed to make fun of anyone else at his or her expense, then sarcasm can sometimes be funny. And we’re all for funny! Laughter can be “good medicine.”

But if, in trying to be funny it: “Stings, Aggravates, Retaliates, is Controlling, Alienates, Shames or Manipulates” (an acrostic put together by Dale & Jena Forehand for S.A.R.C.A.S.M.)—it isn’t funny—not to the person on the receiving end; it’s just plain out mean spirited. And nothing should be funny about that!

Steve and I often share sarcasm in lighthearted ways. We sometimes enjoy dry humor that has an edge to it. But we’ve learned (the hard way) that this edge had better be a soft one rather than a cutting one. If not, it can hurt the other person. And if we hurt our spouse, we can cause damage to our relationship. If we’re both genuinely laughing (and no one else is hurt by it) then there’s no harm done. The remark can bring levity into a difficult day. But if someone is hurt in the process, then it’s not good at all.

The dictionary defines sarcasm as a “sneering or cutting remark. …The word sarcasm comes from the ancient Greek word sarkázein, which meant ‘to tear flesh.’ That verb became a metaphor for ‘speaking bitterly.’” When you look at it that way… OUCH! We had better be careful!

We can easily fall into the trap of zinging each other with sarcasm. Sometimes we’ve been with those who have done this to the other spouse. And that is a very uncomfortable place to be! We just want to tip toe unseen out of the room. Often times that spouse will say, “just kidding.” But watching one spouse humiliate the other isn’t funny. It’s not funny to the receiving spouse, and not to us. When one spouse tears at the other, it’s no laughing matter.

This is what Dr Betty Philips says about teasing that hurts. And we totally agree with her:

“Hostile teasing, picking, biting humor or sarcasm too often can be insults poorly disguised as humor. They’re also ‘double bind’ communications, which cause frustration, personal pain and anger in the recipient. The disguised message runs as follows. ‘I’m making fun of you and belittling you; but it’s only humor. I don’t really mean what I just said. There’s something wrong with you when you don’t accept my statements at face value as teasing even though my words are critical and hostile.’ The more clever and witty the comment, the more difficult it is to respond.” (From Dr Philips article, “Teasing: Just Joking?”)

That’s so true, isn’t it? I have a close relative that uses this type of “humor.” I put the word humor in quotation marks because often I don’t find his remarks to be humorous. Over and over again he’ll say, “I’m just kidding.” But to me, his remarks were just hurtful. And when I was younger, I didn’t know what to say.

But I’ve since found my voice. So now, when it applies I tell him that I don’t think it’s funny. It has curtailed a lot of his sarcastic humor (at least with me). I know I’ll never stop him completely. But if I can stop some of it, I’ll just live with the rest. That’s because despite his insensitivity, I still love him. However, I sure wish he would find another way of trying to be funny!

Along this same line concerning sarcasm

Here are a few more insights on this aspect of sarcasm—especially as it relates to marriage:

“While humor may appear to soften the blow, the unseen emotional damage of sarcasm can be devastating. I’m convinced many marriages die of a thousand emotional cuts instead of one deadly blow. A steady diet of sarcasm poisons a marriage. … A sarcastic environment robs a marriage of peace and joy. These are two parts of the fruit of the Holy Spirit in a Christian’s life. (See: Galatians 5:22-23.) … There are plenty of healthy ways to fit humor into your marriage. Choose to break the sarcasm habit, and die daily to yourself. (See: 1 Corinthians 15:31.)” (Rodney A. Wilson)

Here’s a suggestion from Doug Fields:

“Don’t say everything you think. As sure as the sun rises each morning, there are going to be times when you will think up snappy, cutting remarks and comebacks. You’ll probably even rehearse them in your head. They will probably sound really good rolling around in your brain. But just because you think it, doesn’t mean you have to say it. It sounds simple, but it’s tougher to follow thru than you might imagine.

“When you are irritated at your [marriage] partner, give yourself a timeout to cool off. Think about what you need to say before you say it. Then, make an appropriate and constructive comment in a loving way. Try it! Keep that sarcasm and snark to yourself—you won’t explode.” (From the article, “Sarcasm Could Be Ruining Your Relationship”)

“Marriage will require you to learn how to communicate. …Communication is the lifeline between two people. There’s no way around it. It will cause you to take responsibility for not just what you say, but how you say it—tone, body language, sarcasm and all.” (Debra Fileta)

Always keep in mind what we’re told in the Bible:

“The soothing tongue is a tree of life; but a perverse tongue crushes the spirit.” (Proverbs 15:4)

“The words of the reckless pierce like swords; but the tongue of the wise brings healing.” (Proverbs 12:18)

“Put away perversity from your mouth. Keep corrupt talk far from your lips.” (Proverbs 4:24)

And that especially pertains to how you speak to your spouse!

When talking with your spouse, choose life. Speak life-breathing words into your marriage partner!

We give a lot of personal stories, humor, and more practical tips in our book, 7 ESSENTIALS to Grow Your Marriage. We hope you will pick up a copy for yourself. (It’s available both electronically and in print form.) Plus, it can make a great gift for someone else. It gives you the opportunity to help them grow their marriage. And who doesn’t need that? Just click on the linked title or the picture below to do so: