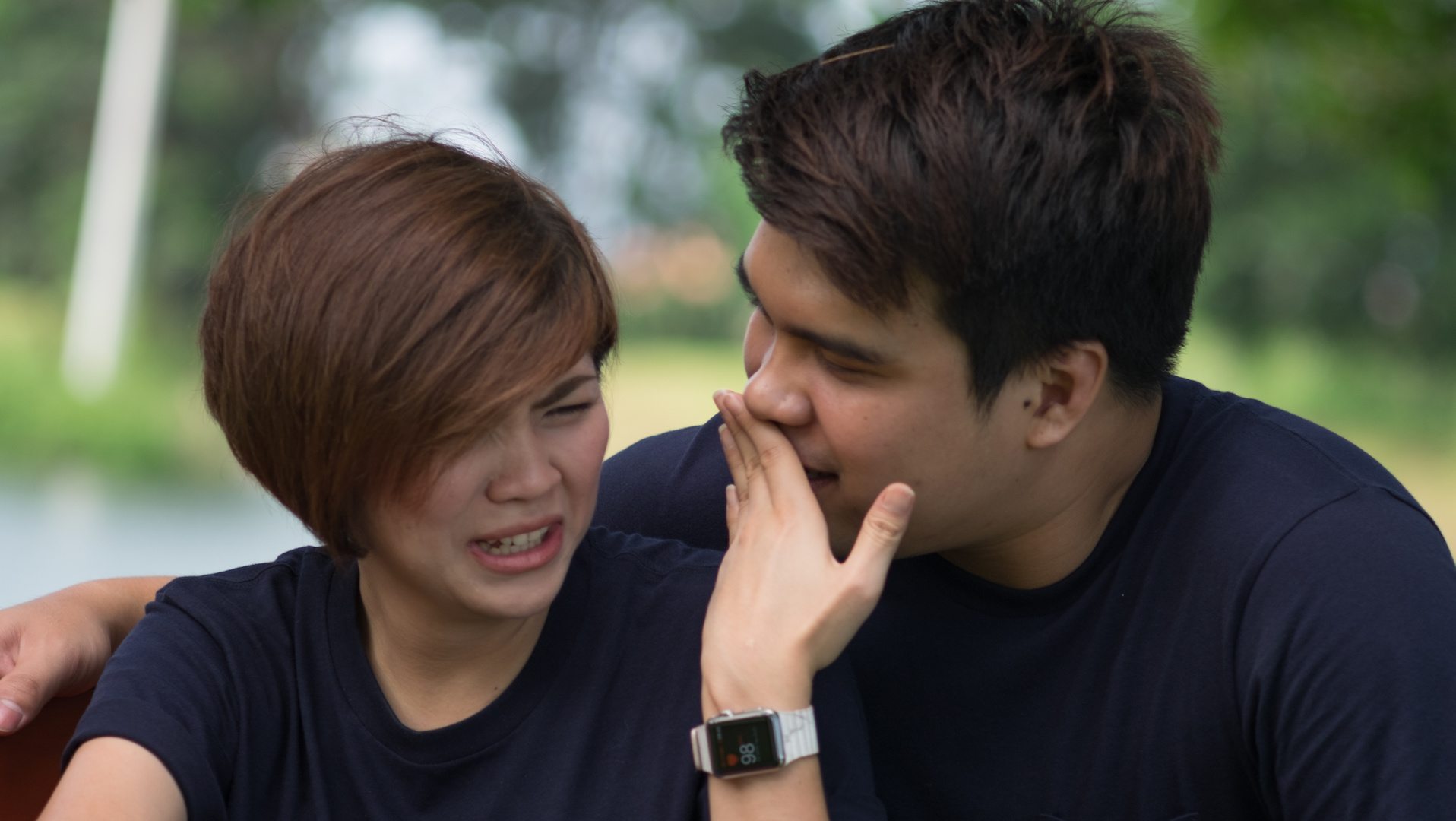 Have you been with a couple where one spouse makes a cutting remark about the other? Then you see the reaction of the other spouse and he or she does NOT think this is funny. We sure have! And when it happens we’re embarrassed to be in this situation. We want to quietly slink away. This is what we’re talking about in this Insight —hurtful humor in marriage.

Often these barbs are treated by the one giving them as if they are a joke. But if the one who is receiving them isn’t laughing, it truly isn’t a joking matter. Sadly, we both confess that we’ve been there, and have even done that in the past. We’ve fallen into the trap of zinging each other with sarcasm. Sometimes we have even had an audience that has witnessed this. And for that we are sorry and wish it never happened. We claim we were “just kidding.” However, as we’ve talked things out, we see that our kidding was no laughing matter.

There are some situations where the offending spouse WAS “just kidding.” But, if the spouse on the receiving end doesn’t view it in that way, it becomes problematic. Humor is as it is perceived and received. We are marriage partners, not opponents. When a “joke” isn’t received as being funny, the offending spouse needs to take note. That way it won’t be repeated in the future. Also, apologizing for the offense at that time can go a long way in healing the hurt. Don’t let it just lay there. Even if we didn’t mean to hurt our spouse, it’s important to own up to the fact that we did.

If we run over our spouse’s foot with a car, even if it was truly an accident, it still hurts them. Apologizing for hurting our spouse is an appropriate thing to do when we deliver pain—whether it was intentional or not. Here’s something that a blogger named Naomi wrote on this issue:

“When your partner makes a serious personal statement such as ‘I want’ or ‘I don’t want,’ or shares an emotion with you, don’t laugh at them. Don’t tease them, or disregard their feelings. When you do, you imply that what they are feeling is mistaken, misplaced or crazy. It denies the validity of the things they care about.

“Respect the power of their feelings. Be serious when your partner is serious. You don’t have to feel the same way (you are two different people after all!). But you should respect and try to understand the reasoning and concerns behind your partner’s position. This shows your spouse that you recognizing her or him as an independent, valuable human being.” (From the Power of Two article, “How Humor Can Hurt Your Relationship”)

Other times certain humor isn’t appropriate. It could be that is the type of humor we like but our spouse doesn’t. If so, save that type of joking for others who enjoy it. Don’t keep subjecting your spouse to it.

Or it could be that it’s a passive aggressive situation. That is another issue that needs attention. (Here are two articles that deal with that issue: • The Passive Aggressive Spouse and • How to Love a Passive Aggressive Husband.) We should be mindful that we cause a lot of damage to the relationship when one AIMS their humor at the other. Humor is to be shared, not thrown at each other like hand grenades. Hurtful humor can cause a lot of destruction.

“People who shrug off deliberate deceptions saying, ‘I didn’t mean it, I was only joking,’ are worse than careless campers who walk away from smoldering campfires.”

Author Rodney A Wilson talks about sarcastic humor that damages in a Home Life Magazine article titled “Cut the Sarcasm.” In it he writes:

“My dictionary is ancient, but its definition of sarcasm is classic. ‘Sarcasm’ comes from a word meaning ‘to tear flesh, like dogs.’ It means to be brutal, have no mercy, be vicious, go for the jugular, tear flesh the way a dog would.”

That doesn’t sound like something marriage partners should do to each other. This is especially true for spouses who love God and pledge to love and honor each other! We are to protect and respect each other’s feelings. We shouldn’t embarrass or “cut” each other down. By doing so, we reveal just how unsafe we can be —which is not becoming of a “child of God.”

“While humor may appear to soften the blow, the unseen emotional damage of sarcasm can be devastating. I’m convinced many marriages die of a thousand emotional cuts instead of one deadly blow. A steady diet of sarcasm poisons a marriage. So it needs to be eliminated. No good comes from using it.

“Trust, a vital ingredient in a healthy marriage, won’t be present when a husband or wife is always braced for the next public or private cutting remark from a spouse. And respect won’t be found in the midst of ridicule. A sarcastic environment robs a marriage of peace and joy, two parts of the fruit of the Holy Spirit in a Christian’s life. (See: Galatians 5:22-23.) In essence, sarcasm severely limits the intimacy between a husband and wife.

“There are plenty of healthy ways to fit humor into your marriage. Choose to break the sarcasm habit, and die daily to yourself. (See: 1 Corinthians 15:31.)”

In another article authors Dale and Jena Forehand also speak about sarcasm and hurtful humor. They write:

“Sarcasm is one of the most harmful verbal tactics used against a spouse. It destroys communication and unity in marriage. One of the oldest military strategies is to divide and conquer. Our enemy, Satan, still uses that tactic to destroy families. Satan first seeks to separate you and your spouse emotionally. Then he moves in and seeks to separate you and your spouse physically.

“When this occurs, he is in perfect position to conquer your marriage. In the midst of conflict, the enemy begins outside the gate of your marriage, cunningly tempting you and your spouse to wage war through verbal attacks. And sarcasm often is Satan’s weapon of choice.” (From the Lifeway.com web site article, “Sarcasm: The Verbal Enemy at the Gate”)

The authors then give an acrostic “to help you to understand why sarcastic remarks are so damaging to marriages.” We can only give you a thumbnail sketch of what they say. (We recommend you read the rest in the article linked to above.) But in essence:

Near the end of the article, the authors challenge us to “Lay It Down.” It’s something we should never forget:

“If we know the enemy uses sarcasm to tear down marriages, then what can we do about it? We need to lay down the weapons of our enemy. And we need to pick up the weapon God has given us through His Word. Colossians 3:12-17 provides the perfect answer.”

“Therefore, as God’s chosen people, holy and dearly loved, clothe yourselves with compassion, kindness, humility, gentleness and patience. Bear with each other and forgive whatever grievances you may have against one another. Forgive as the Lord forgave you.

“And over all these virtues put on love, which binds them all together in perfect unity. Let the peace of Christ rule in your hearts, since as members of one body you were called to peace. And be thankful. Let the word of Christ dwell in you richly as you teach and admonish one another with all wisdom, and as you sing psalms, hymns and spiritual songs with gratitude in your hearts to God. And whatever you do, whether in word or deed, do it all in the name of the Lord Jesus, giving thanks to God the Father through him.“

We can all learn from each other. Lets laugh together and enjoy it “as good medicine” being careful to humor, not hurt each other.

3 responses to “Hurtful Humor in Marriage”