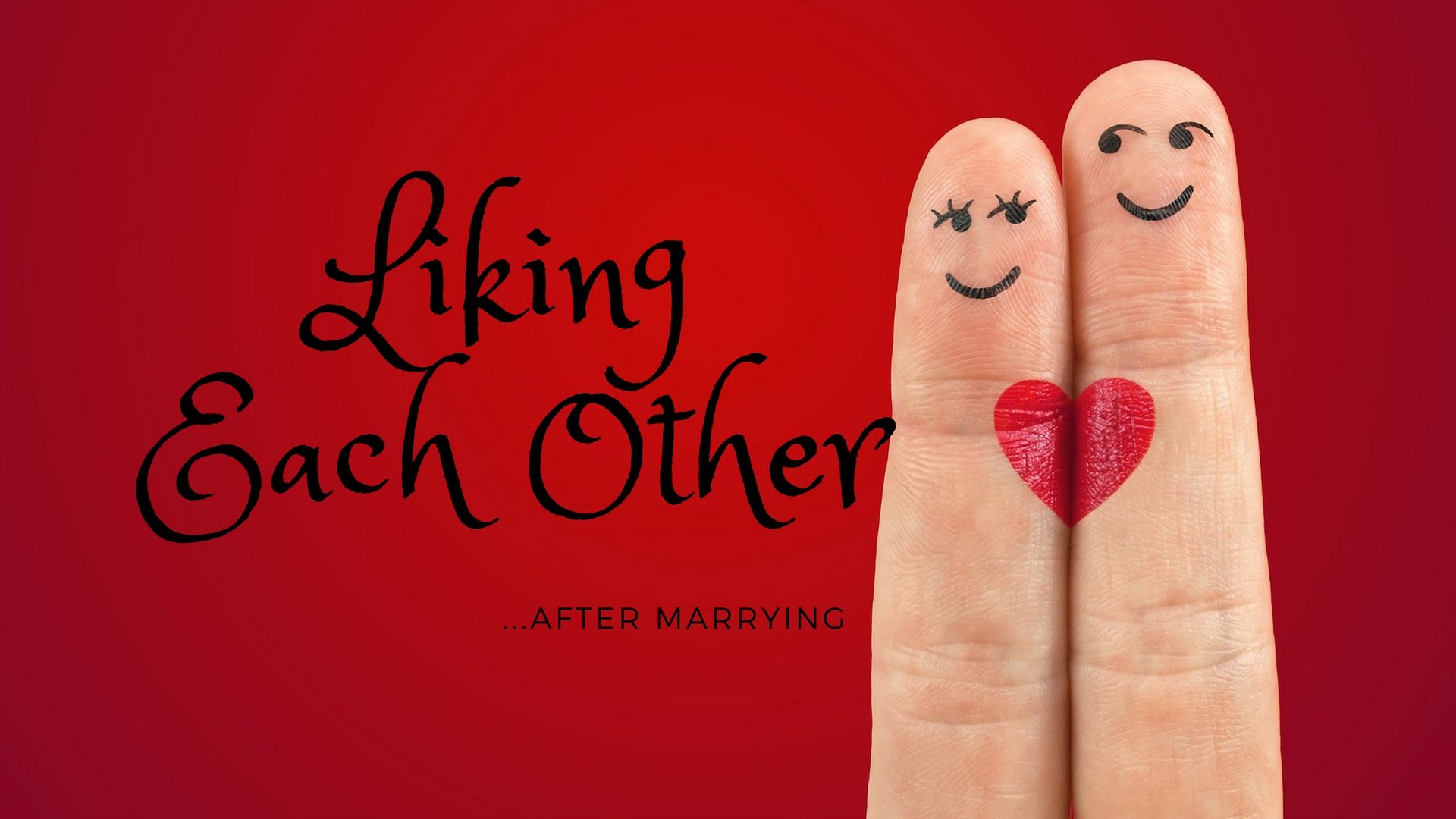 Just because you’re married and you live in the same house together, it doesn’t mean that you still love and LIKE each other. It also does not mean that you SHOW it in a way that the other understands. Your love may be one of the best kept secrets around! Even liking each other may be a secret. Or maybe it’s not:

“Only five out of a hundred teens interviewed in a major marital study desired a marriage like their parent’s. Just five. Why? There were a number of reasons given, but I ultimately believe it’s because your kids are watching. You may think you’re hiding the anguish produced by your inability to connect and love, but you’re only kidding yourself. They hear it in your every word to each other and see it in your lack of contact. It charges the air” (Dr Tim Clinton, from the book, Before A Bad Goodbye

There’s a TV ad that has an older couple commenting how much they enjoy being together after many years of marriage. The husband says, “There are only a few couples our age that we know still like each other.” How very sad. Many couples get to the point where they tolerate each other more than they show love to one another. And frankly, it just shouldn’t be.

In Gary Thomas’ book, Devotions for a Sacred Marriage

he writes about the brides-to-be, and married women he talked with at a marriage conference. Those that were not yet married “gushed with enthusiasm” about the things they loved about the men they would be marrying. But the married women emphasized the faults they saw in their husbands, rather than the good. He then posed the question:

“Where is the bridge that leads a woman to stop defining a man by what he is and start defining him by what he is NOT? The sad answer, unfortunately, is marriage. All our hopes, expectations, and dreams get poured into this relationship. Because we marry a sinner, each day brings new and often legitimate disappointments. Before long, we stop seeing what attracted us. Instead, we become consumed by what disappoints us. Before marriage our eyes were filled with the good points of the person we had chosen to spend our lives with. Now our eyes get filled with their shortcomings.”

Some of you are dealing with HUGE bridges that have fallen down between you. These bridges that seem impossible to rebuild. It’s difficult to say if that, which is separating you, can be bridged. But “with God all things are possible.” Please don’t focus on the impossible, but rather on what is possible with God.

We know a couple named Clint and Penny Bragg, who were divorced for over 11 years. God worked within both of them in separate parts of the country and drew them back together. They eventually remarried. Their differences, which seemed impossible to bridge, were as far as the East is from the West. But this didn’t stop God. (You can read about and hear their testimony in the Save My Marriage Testimonies page along with many, many others.)

Even when there appears to be no bridges that can be built, it’s amazing what God can do when even one partner is open to approaching things differently. All of these couples now love AND like each other.

The problem can often be that we eventually focus on what we don’t like about each other, rather than what we do. We stop making the effort to continue to romance and grow good feelings about each other. Many of us believe that marriages go bad because of fighting that occurs. But, “The issue isn’t whether you fight, it’s HOW you fight and how rich your stockpile of GOOD feelings is about each other to weather difficulties and keep your basic attitude toward your partner positive” (Dr John Gottman).

“Inside all of us is a Love Bank with accounts in the names of everyone we know. When these people are associated with our good feelings, ‘love units’ are deposited into their accounts. And when they are associated with bad feelings, love units are withdrawn. We are emotionally attracted to people with positive balances and repulsed by those with negative balances. Our emotions encourage us to be with people who seem to treat us well, and avoid those who hurt us.”

That’s why it’s important to build upon the love and respect you gave in the beginning of your relationship. You need to “stockpile” your good feelings for each other.

Surprisingly, the “love units” you give to your marriage partner, usually don’t have to be big. As a matter of fact, it’s usually a lot of little choices you make. These are ones that show your love and “like” for your spouse that matter the most. As Simone Signoret said, “Chains do not hold a marriage together. It is threads, hundreds of tiny threads, which sew people together through the years.” The problem is that we after marrying, many of us forget to keep sewing. Our love for each other dies of neglect.

Marriage expert Dr John Gray talks about the importance of doing big and little things to help the romance to stay alive in marriage. He says,

“Doing little things to create romance is like building a fire. You cannot start it with the big logs. You have to start it with paper, then adding kindling and the big logs. In the beginning of a relationship, we naturally start out with the paper and kindling. After we put the big logs in, we stop. However, to keep the passion alive in our relationships, we need to pro-actively add to the fire EVERY DAY.”

When you choose a friend, don’t you look for someone who’s pleasant, attractive, and enjoyable to be with? I don’t tend to stay in long-term friendships with people who are always negative, boring, or unhappy, and I shouldn’t expect my mate to either. Since he and I are committed to each other, we want that ‘staying’ to be as fun as possible.

Ask, and keep asking God, to show you things you can do to build “love units” with your spouse. Read your Bible. There are thousands of things written there to apply in your marriage. Our Wonderful Counselor, the Holy Spirit, will guide you in this mission. If you don’t like or love your spouse, ask God to show you how to begin again. We have a Romantic Ideas topic on our web site available to help you to get and continue to light up good “sparks” in your relationship.

Ask your God, whose very name means LOVE, to teach you how to show love to your spouse in ways that truly reveal and reflect the love of Christ. It’s an important mission!

“Be imitators of God, therefore, as dearly loved children and live a life of love, just as Christ loved us and gave himself up for us as a fragrant offering and sacrifice to God“ (Ephesians 5:1-2).