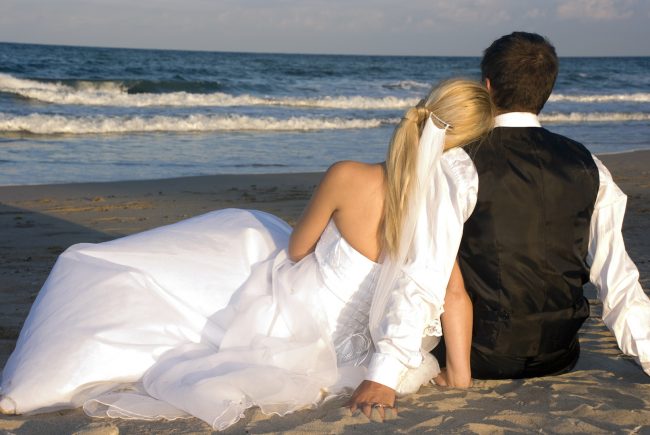 The other night, as Steve and I watched TV together, a commercial came on, which was promoting the program, “Married at First Sight.” (It’s easy to guess that we would not endorse that television show.) I was stunned by what the bride stated just before she walked down the aisle. She peeked through the curtain, looked at her groom, and whispered, “This is the man I will be married to, MAYBE forever.”

Starting a Marriage With Doubt?

What a horrible way to start a marriage! I will marry this person MAYBE forever? When you start out with doubt already planted into your mind, what will happen when the tough times come? And that they will! The Apostle Paul even stated that in the Bible, “Those who marry will face many troubles in this life; I want to spare you this.” (1 Corinthians 7:28) It is a fact.

But somehow, most of us are clueless to think those tough times really will hit us. And even if we did consider it, it’s difficult to imagine how bad it really can get. We’ve seen couples go through fires, floods, hurricanes, tornadoes, black mold, and robbery. Furthermore, we seen couples who have lost jobs, lost homes, lost children, and loved ones. And then there are couples experiencing infertility, miscarriages, car crashes, bankruptcy, cancer, AIDS, head injuries, heart attacks, memory loss… just to name a few.

This is a Wake Up Call!

First off, please know that this Marriage Insight isn’t meant to depress you. But it IS meant to wake couples up who are marrying in such a state of naivety. Marriage is a HUGE deal! It goes beyond being a huge deal. It’s a sacred covenant entered into with God and another person. And we’d best not enter into it with the flippant attitude of “maybe” this marriage will work out. Most likely it won’t with that attitude as a foundation builder.

“If you have serious doubts and get married anyway, the odds are that you’ll be sorry. Don’t let your desire to get married overpower those doubts.” (Lilo and Gerard Leeds)

“Marriage is not to be entered into inadvisably or lightly, but reverently, deliberately, and in accordance with the purposes for which it was instituted by God.” (Kay Cole James)

Yes, we have known of arranged marriages that work out to be good ones. But that is rare… it’s very rare, indeed! We receive emails and comments posted on our web site continually about this issue. In today’s world it is difficult for those who “fall in love” first, to build their marriages into good ones. This is not a “marriage friendly” world. There are plenty of people who are more than willing to tell you to dump out of your marriage.

But when you don’t have a deep seeded commitment to God and each other, may God help you! And we mean that with all sincerity.

For this reason, you will find a few quotes below that address this issue. Please prayerfully consider what is said.

•  Many will instruct you to “follow your heart.” This advice can lead to a heartbreaking situation. One emotional student was heard to exclaim, “I know I’ve met the right girl … I can’t sleep, can’t eat, and I’m flunking all my tests!” Sounds like a case of the flu to me. Let me suggest, instead of asking, “Am I in love?” ask, “Is my love mature enough to produce a fulfilled love, marriage, and sex relationship?”  … The issue isn’t whether or not you are in love. The real question remains, “Is my love mature enough to lead to a commitment and a lasting relationship?” (Josh McDowell)

• Here’s a motto for the bride and groom: We are a work in progress with a lifetime contract. (Phyllis Koss)

• A marriage is not a joining of two worlds, but an abandoning of two worlds in order that one new one might be formed. In this sense, the call to be married can be compared with Jesus’ advice to the rich young man. He told him to sell all his possessions, and to follow Him. It is a vocation to total abandonment. For most people, in fact, marriage is the single most wholehearted step they will ever take toward a fulfillment of Jesus’ command to love one’s neighbor as oneself. (Mike Mason)

• Marriage is meant to keep people together, not just when things are good, but particularly when they are not. That’s why we take marriage vows, not wishes. (Ngina Otiende)

Here are some more:

– To keep a vow, means not to keep from breaking it, but rather to devote the rest of one’s life to discovering what the vow means, and to be willing to change and to grow accordingly. (Mike Mason)

– At prime moments, God will use marriage to show you how to love the unlovely. (Dennis Rainey)

– Getting married is the boldest and most idealistic thing that most of us will ever do. (Maggie Gallagher)

– It takes guts to stay married … There will be many crises between the wedding day and the golden anniversary, and the people who make it, are heroes. (Howard Whitman)

– Marriage can be wonderful. It can be deeply satisfying and mutually fulfilling. But if it is to become that, it is because both partners paid a very high price over many years to make it that way. They will have died to selfishness a thousand times. They will have had countless difficult conversations. And they will have endured sleepless nights and strained days.

These marriage partners will have prayed hundreds of prayers for wisdom and patience and courage and understanding. They will have said, “I’m sorry” to their spouse too many times for them to remember. They will have been stretched to the breaking point often enough to learn, that unless Christ is at the center of both their lives, the odds for achieving marital satisfaction are very, very low. (Bill Hybels)

Our Prayer for You:

Lastly, This is our prayer for you.