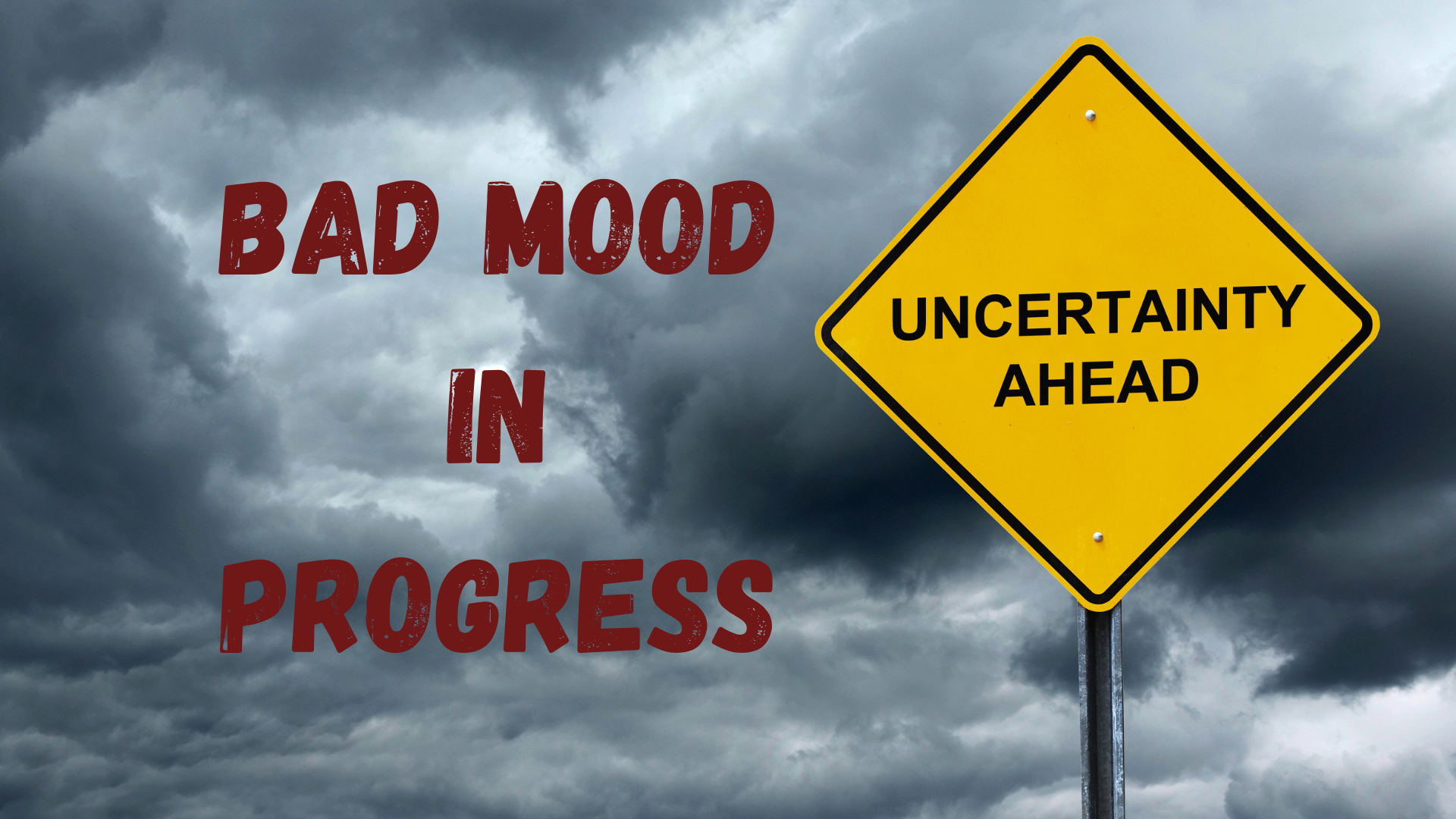 I recently read a blog written by “Paula” titled, “Bad Day Warning.” It caused me to remember my own experiences on this issue. It also got me to laughing (kind of). And now, it got me to writing this blog, with a purpose in mind. I’m talking about a “bad mood” incident.

Have you ever had a day or part of a day where everything seemed to irritate you? You didn’t really know why, but if anyone crossed your path in a wrong way, it set you off. And then your bad day explosively became his or hers.

If I had to guess, I’d say that most everyone has had those types of days.

But have you ever thought to warn your family members —particularly your spouse, when you’re having one of “those” days? This way he or she could walk a little quieter and hopefully give you the grace and space you need?

I don’t know why, but it didn’t occur to me until I was in my 30’s, to give out these kinds of warnings ahead of time. One day, though, I was having a P.M.S. kind of day. I remember my husband doing something that was irritating me. I turned to him and said something like, “I’m having a bad day. It won’t take much to set me off. I need you to give me some space and tread quietly for a while. This way I can work this through with the Lord. I’m just giving you advanced warning on this.”

It was a bit comical, actually when I think about it. I saw him back up and quietly leave the room, without a word. I hardly saw him for a few hours. And when I did, he was very quiet and respectful. He gave me the grace and space I needed and I was able (and so was he) to get past the whole thing in a much healthier manner. I remember thinking to myself later, “Wow! That worked. Why didn’t I think of warning him before when I’ve been in a bad mood?”

I decided that I would do that from then on when I was feeling irritable. After all, why should I just dump my bad mood onto him? It’s a matter of common courtesy to let him know that I need some room to work through my issues.

But I’ll never forget weeks later, when I was having another one of “those” days. I warned our oldest son David (who was about 14 at the time) that I needed things to be quieter and less intense. I wasn’t in the mood for a lot of noise or joking around and such. For some reason, he didn’t take my warning seriously. He started needling and teasing me, thinking he was quite funny. I wasn’t seeing it that way and warned him again. But again, he didn’t heed the warning and continued on. Well, I lost it and dumped my bad mood all over him.

I remember looking at him afterward. He was as wide-eyed as they come! Actually, I almost started laughing at that point because of the stunned look on his face. My husband Steve was in the room at the time. He just leaned over to David and said, “She warned you, but you didn’t listen.” And then he quietly walked out of the room. At that point, I think I did laugh because the whole scene was so bizarre.

David and I talked about it later. We each apologized and smoothed things out. But I can tell you that whenever I warned David or our other son John (who witnessed the whole thing), or I warned Steve about being in a bad mood, I never had any of them challenge me on it again.

I can also tell you that the warnings helped. Sometimes I gave them (I tried not to give them too often), or one of our sons or my husband gave the warning, because they were having a rough day. Respectful warnings were given and the others usually gave the respectful space and grace back (although it sure wasn’t 100 per cent of the time). As a result, there was a lot less bad mood dumping going on around our house. It made a positive difference, no doubt!

So that’s the “purpose in mind” that I mentioned at the beginning of this blog. I’m hoping that if you haven’t tried giving the “warning” yet, that you will (although if you’re in an abusive marriage, you might not find it safe to do so). If you’re able to though, you might even talk about it beforehand. Actually, it would probably be best to do so.

Just make sure it isn’t a H.A.L.T. time —one where you and your spouse (and kids, if you have them) aren’t Hungry, Angry, Lonely, or Tired. Those are not good times to accomplish getting any serious point across.

I realize that given the dynamics of some marriages and families, that might be a challenge in itself (and might even put you in a bad mood while you’re trying to do this). But if you’re able to talk about this beforehand, you may have more of a chance of this going over better than it would otherwise. It worked for us and it just may work for you.

It’s worth a try, though, don’t you think?