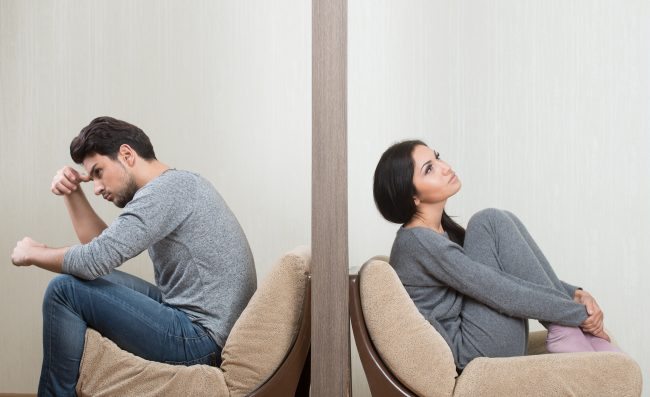 Originally, this message was titled, Why Women Leave Men. But in re-thinking this message it seems sensible to address why spouses leave marriage on both the wives and the husband’s parts. Of course this message can’t be all inclusive. But hopefully it will shed light for some who are in the dark and promote good discussion —particularly in the comment section below this message.

Why do husbands and wives leave marriages they promised to be in for the rest of their lives? It’s simple —it’s because they can. Sometimes leaving seems easier than staying committed and working things out. And lets face it, it appears easier to divorce in today’s world.

So, as we look at this subject, please understand we are going to address this in “general” terms. It will apply to MOST husbands and wives. We understand there are exceptions. And as you read this, first pray and ask God to show you what YOU should get from this and APPLY to your own life and marriage.

If you ask a woman why a wife would leave her marriage she’ll give answers like:

And the list goes on and on and on. But most of the reasons had to do with feelings and emotions.

Now, when you ask a man why a husband would leave his marriage, our first response is usually a blank stare. This is followed by the words, “I dunno.” At least that was my first response. But I (Steve) was curious. I wanted to see what the “experts” had to say about the reasons men give for leaving their wives.

As I did an Internet search on this topic I discovered two things. First, there’s not much that addresses this side of the problem. And second, what I could find pretty much summed it all up in three categories:

We hear from so many husbands whose wives have left (and they don’t understand, “why”). And we hear from so many wives who say they’re “fed up” and are ready to walk out or have already left. That is we want to give you some insight from Dr. Willard Harley. He wrote a helpful article titled, “Why Women Leave Men.” And while this focuses on the issue from a wife’s angle, you can see a husband’s perspective as well. Our prayer is that God will help us ALL learn from what Dr. Harley shares. So pray, glean, and see what speaks to you about your situation (whether you are the husband or the wife).

Here is a portion of what Dr Harley writes:

“Each day I’m confronted by women who are extremely frustrated with their marriages. Usually, they express no hope that their husbands will ever understand what it is that frustrates them —let alone change enough to solve the problem. From their perspective, marital problems are created by their husbands who do little or nothing to solve them. Wives tend to see themselves as the major force for resolving conflicts. And when they give up their effort, the marriage is usually over.

“When I talk to their husbands, they usually have a different explanation as to why their wives feel the way they do. They often feel that the expectations of women in general and their wives in particular, have grown completely out of reach. These men, who feel that they’ve made a gigantic effort to be caring and sensitive to their wives, get no credit whatsoever for their sizable contribution to the family. They feel under enormous pressure to improve their financial support, improve the way they raise their children, and improve the way they treat their wives. Many men I see are emotionally exhausted. They feel that for all their effort, they get nothing but criticism.

“Men’s perceived failure to satisfy their wives is punctuated by the fact that women file for divorce twice as much as men. In other words, their unhappiness with marriage often results in divorce. The most common reason women give for leaving their husband’s is ‘mental cruelty.’ When legal grounds for divorce are stated, about half report they’ve been emotionally abused. But the mental cruelty they describe is rarely the result of their husbands efforts to drive them crazy. It’s usually husbands being indifferent, failing to communicate and demonstrating forms of neglect.

“When all forms of spousal neglect are grouped together, we find it’s far ahead of all other reasons combined that women leave men. Surprisingly few women divorce because of physical abuse, infidelity, alcoholism, criminal behavior, or other serious grounds. In fact, I find myself bewildered by women in serious physical danger refusing to leave the men that threaten their safety. Simply stated, women leave men when they’re neglected. Neglect accounts for almost all reasons women leave and divorce men.”

“…Some of the most common complaints I hear from women is, ‘He ignores me except when he wants sex. He sits and watches television when he could be talking to me. Plus, he rarely calls to see how I’m doing. He hurts my feelings and never apologizes. Instead, he tells me I’m too sensitive.’ Most husbands are mystified by these complaints. They feel their wives demand too much, and that most other women would be ecstatic to be married to them. Their wives have become spoiled, take their efforts for granted and have unrealistic expectations.

“Do women expect too much from their husbands or are men doing less for their wives than they should?” (To learn more solutions Dr Harley gives, please read “Why Women Leave Men.”)

Cindy and I answer Harley’s question with a “Yes and Yes!” We have found that both husbands and wives come into marriage with without really realizing the effort it will take to make their marriage into a good one. Plus, their expectations are too high. This sets them up later for big problems as illustrated above.

Trashing and Cleaning Up Marriage

It’s not difficult to “trash” your marriage—to get it to the place where it is messed up, needing a clean up. You can read about it in the following article: Trash Your Marriage (this will also give you ways to ways to clean it up). And when the marriage appears to be too much of a “mess” to clean up, that’s when spouses are tempted to just leave marriage. It appears to be too overwhelming.

In our 45+ years of marriage we’ve both been guilty of much of what Dr. Harley and Sue Boulin described. Cindy would readily admit that she expected too much from me. And sadly, I was neglectful of many of her needs. I did not realize how important they were to her.

To us, the bigger question relating to this subject is, How can we change this pattern so we don’t look at divorce as an option? I think we found an answer simply stated in this quote from Walt Henrichsen. It’s written in his devotional titled, Thoughts From The Diary Of A Desperate Man:

“You can do two things that most people cannot resist. You can love and serve them. Loving and serving is a ministry and you do not need special gifts to do it.”

Think and pray about this. We have a lot of articles posted on this web site that can build upon this concept. Plus, we have articles that can help you to “clean up” the trashy attitudes and actions that spouses can fall into. Here are two of them:

• The Practice of Self Sacrifice

The effort it will take to clean up a trashy marriage goes with the scriptures:

“You were called to be free. But do not use your freedom to indulge the sinful nature. Rather serve one another in love. The entire law is summed up in a single command. ‘Love your neighbor as yourself.’ If you keep on biting and devouring each other, watch out or you will be destroyed by each other.“ (Galatians 5:13-15)

And how much closer of a neighbor can you get than a spouse? So, how can you love and serve each other? If you need help, make improving your marriage your mission. Look around our web site to see what you can find that will help you. Be intentional in working to make your marriage the best it can be.