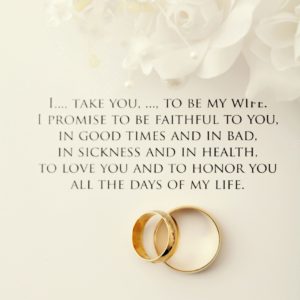 In our wedding vows most of us promise to “love honor and cherish” each other. And then here comes the clincher to this vow; we promise to do this TIL DEATH DO US PART. But what we see in society, is that in many of the ceremonies, perhaps the wording should be, “Till death do us part, or until we’re unhappy, and then it’s till divorce do we part.”

On this issue, Julie Baumgardner (Executive Director of First Things First) wrote some things to consider in an article titled, Baumgardner: Till Death Do Us Part. How do we fight against the tide of rising divorces? She explains:

Until Death Do Us Part?

Marriage experts have found that couples that make their marriage work make a decision up front that divorce is not an option. Although many couples who end up divorcing have challenges, the reality is, their marriage probably could have been saved and in the long run been a happy one. [Please note: Most marriages that end up in divorce are not ones where abuse is the reason.]

Their fatal error in the relationship was making the mistake of leaving their options open. If the going gets too tough, in their mind, divorce is always a way out. It might surprise you to know that research shows that divorce does not make people happier. Does divorce make people happy? Findings from a Study of Unhappy Marriages conducted by the Institute for American Values found that:

The bottom line is you have to make a decision to stay at the table and be committed to making the marriage work. There are some things you can do to keep the vow you made —until death do us part:

Learn skills to help you keep your marriage on track.

Research continues to show that couples who learn how to talk to each other, resolve conflict, manage their money, have appropriate expectations of the marriage, and build intimacy are significantly more likely to keep their marriage on track over time.

Understand that the grass may look greener on the other side. But you still have to mow it.

On the surface someone may look better than the one you are with. But the reality is even beautiful grassy sod eventually has onions, crabgrass and clover if it isn’t properly cared for. In most cases, people who have jumped the fence (and left the marriage) will testify that the grass is not greener. It’s just different. Learn how to resolve conflict without threatening to leave the marriage.

All couples have spats.

Some yell, others talk things through. The common denominator for couples who keep their marriage on track is learning how to disagree with the best of them. But leaving the marriage is never seen as an option. Stop using divorce as a crutch. Instead of giving up on the marriage when the going gets tough, consider it a challenge to learn as much as you can about your mate. And learn about how you can effectively deal with adversity. Make an intentional decision to love the one you are with.

Sometimes it is hard to see the forest for the trees. One woman described her 65-year marriage to a group of young people. She shared about seven years throughout the 65-year span that were really bad due to work conditions, children, no time together, the husband working out of town for a couple of years, etc.

In the end she asked herself the question, “Would I really want to trade 58 good years for seven bad years?” The answer was a resounding No! All marriages experience trials and tough moments. Don’t trade years of history for a couple of bad months or tough years.

Make a plan for your marriage.

Going into marriage without a plan is like playing a football game without memorizing the play-book. If you are going to win, you have to have team meetings, set goals, learn and relearn skills, learn how to lead and follow, and share responsibilities. You both need a copy of the play-book [which is the Bible]. If you want a “til death do us part” marriage you have to learn the plays so you can execute them correctly. That takes time.

You have to learn to adapt the plays when situations change.

You know there will be times when you will have a few setbacks. But you continue to move toward your goal line and even score a few winning touchdowns. You can’t do it by yourself. It takes your teammate to block for you, throw the ball to you, and help you up when you fall down. Plus your teammate encourages you when the going gets tough. It has been said that individuals win games; teamwork wins championships. Make it your goal to have a championship marriage.

In closing, we want to share something that author Sheila Wray Gregoire pointed out in a recent blog. It’s titled, “Don’t Forget How Much They Want Us to Fail.” The “they” she refers to in the article is society and the enemy of our faith. And what she has to say about it is SO true! Below are a few of the points Sheila makes on why it’s important to fight for our MARRIAGE, rather than fight against each other. We recommend that you read what Sheila wrote, because her point is well taken.

“When our marriages work, we show the culture how shallow it is. We shine a light on the fact that everything they’re chasing after and basing their lives on is essentially meaningless. If married people stay together, continue to love each other even in the rough times, continue to be happier, healthier, and wealthier, and raise better kids, then maybe there really is something to that morality thing. And people don’t want there to be. They want morality to be a sham.

“We’re surrounded by the message ‘you just need to be happy’, as if happiness is God. And so when we’re not happy we start to question our choices and our relationships. This is because if we’re not ‘being true to ourselves’, then what’s the point? Our culture is set up to hurt marriages, not help marriages. It is set up to encourage divorce.

“…And so what is the response? Listen to God. Talk to your mate. Keep him as your best friend, so communication is strong. As much as possible, get rid of negative media. …Don’t settle for mediocre. Fight for your marriage! And if someone else, or something else, is threatening to take you off the right path, fight back!

“…When you do, you strike a blow against our culture. When you fight for your marriage, you’re fighting for something bigger than yourself. It matters. You matter. And God never intends for you to have to fight alone!”

For all who are fighting for your marriage, “May the Lord direct your hearts into God’s love and Christ’s perseverance.” (2 Thessalonians 3:5)